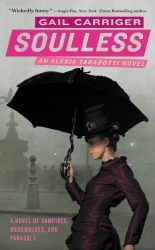 Soulless is the first of Gail Carriger's Alexia Tarabotti novels, and is described as "A novel of vampires, werewolves and parasols". In Carriger's Steampunk Victorian London, vampires, werewolves and ghosts live fully integrated in society, and is one of the things that have helped make the British Empire so very great. Queen Victoria has both a vampire and a werewolf advisor; vampires dictate popular fashion and werewolves help control the armed forces.

Carriger's heroine is the outspoken, independent-minded spinster Miss Alexia Tarabotti. She has the misfortune of having a father who was not only Italian, but is now dead. Her silly mother has remarried, and Alexia has to suffer the opinions of her and her frivolous and blonde younger sisters. As well as being in possession of a Roman nose, unruly dark hair and a skintone rather more tan than is considered fashionable (especially with vampires deciding what is truly chiq), Alexia's chief legacy from her dead father is her lack of a soul. She is a preternatural, a creature who can cancel out the powers of all the supernaturals in society. If she touches a vampire, their fangs retract and they lose their superhuman stength. She can even turn a werewolf entirely human, even during a full moon.

Because of her unusual powers, the Bureau of Unnatural Registry (or BUR as it's generally referred to in the book) has kept a close eye on Alexia since she was a young girl. The head of the BUR, Lord Connal Maccon, the Earl of Woolsey and alpha of the London pack of werewolves is not amused when he finds Alexia next to a dead vampire at ball. The fact that Alexia accidentally killed the vampire in self-defence, after the poorly-dressed and uncouth creature tried to kill her in the library, does not seem to make him any happier. Lord Maccon and Miss Tarabotti have clearly have frequent run-ins and disagreements over the years, ever since "the hedgehog incident" a few years back. Yet neither can help but be slightly pleased when they keep being thrown together in the course of the investigation of the strangely behaved vampire and the events that follow its demise.

Soulless, if one must classify it, is a Steampunk paranormal romance, written in a wry and witty style, reminiscent of P.G Wodehouse and Jane Austen - both of whom Carriger admits to admiring. Occasionally, Carriger would use a more modern or informal turn of phrase, which I found a bit distracting and annoying, but the book as a whole was very amusing, and the dialogue in the book (not just that between Alexia and Lord Maccon) sparkles. Alexia is a very formidable and capable heroine, and I am already looking forward to reading her and the Earl of Woolsey's continued adventures in Changeless, which is released early next year.
Posted by Malin at 22:02