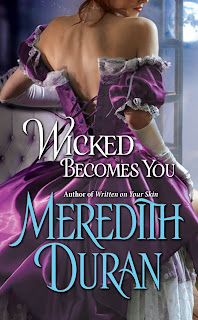 Gwen Maudsley is known as the nicest girl in London. She will knit for orphans until her wrists ache, charm condescending old dowagers and never say an unkind word to anyone. Once she is jilted by her second fiancee, this time at the altar, she decides that maybe marrying into nobility and being pleasant to everyone may not be the way to go. If three million pounds and a pleasing manner isn't enough to secure her a husband, what is it actually going to take? To make matters worse, her weaselly fiancee has fled to Paris, and taken the ring of her beloved dead brother with him. She is determined to go to Paris to retrieve the ring. It's time for Gwen to stop being nice, and try being wicked.

Alex Ramsey may just be the man to help her on her road to adventure. He was her brother Richard's best friend and business partner, and promised Richard on his deathbed that he would take care of Gwen. He has always tried to honour the promise from a safe distance, as he always found her a little bit too fascinating up close. While in Paris trying to track down the man who bought some of the family property in order to buy it back, he is alerted to Gwen's undesirable presence by his twin sisters. It quickly becomes clear that Gwen is not interested in going back to London to try for yet another engagement, and that she doesn't just want to track down the cowardly Viscount who has her brother's ring. She wants to experience the more unusual haunts of Paris, and if Alex won't help her, she will find someone else who will.

Meredith Duran has only written four romance novels so far, but each one is better than the next, and Wicked Becomes You may be my favourite one yet. Gwen's transformation from the society darling who lives to please everyone, but who has also worked so terribly hard never to really get properly attached to anyone after her brother's death, to an outspoken, self-assured woman is wonderfully done. She also, very gratifyingly, does not go from innocent society miss to liberated adventuress overnight, there are definitely moments where she is shocked and a bit scared by the new situations she finds herself in.

Alex is also a great character, who suffered from crippling asthma as a child, has spent most of his life escaping the expectations of his family and their continuing fears for his health. He blames himself for Richard's death, and has continued to run the successful business they founded, despite his family's disapproval (although they benefit greatly from the money he makes). He has been fighting his attraction to Gwen for years, but this becomes a lot more difficult for him when they have to travel to the south of France to pursue the man he believes defrauded his brother out of some of the family land. He has always known she has been repressing her true self to fit into polite society, and the person she emerges to become even more fascinating than the girl she was.

The romance obviously does not run entirely smoothly, but all the obstacles thrown into the couple's path seem believable, and the way their relationship develops throughout the book is heart-warming and occasionally took my breath away. The book has all the things I look for in a good romance, and I'm so glad it lived up to my already quite high expectations. Meredith Duran is now on my Must Buy list, and I will be pre-ordering her books from now on.
Posted by Malin at 13:49