CBR2 Book 83: "The Ruby in the Smoke" by Philip Pullman 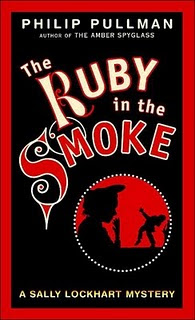 Veronica "Sally" Lockhart is sixteen years old and recently orphaned. Her father's ship, the Lavinia, sank, and shortly after Sally received a mysterious note in the post. She goes to see her father's shipping partner about the contents of the note, but only gets to see his secretary. When she asks Mr. Higgs, the secretary, about Marchbanks and "the Seven Blessings", the man has a heart attack and dies. One of the office boys, Jim Taylor, helps her decipher bits of the oddly written note, and they figure out that this Marchbanks is a person, who lives in Chatham in Kent. They are unable to figure out what "the Seven Blessings" are or why it might scare a grown man to death.

It quickly becomes clear that there are mysterious events surrounding Sally's early childhood in India, during the Indian Mutiny, that she keeps having nightmares about. She gets a letter from Major Marchbanks, and when she goes to see him, he gives her a package containing a journal, and warns her that a Mrs. Holland is threatening him, and can be dangerous to Sally, as well. Sally sees Mrs. Holland following her on the way back to the train station, but is helped by a young photographer, Frederick Garland, who hides her from the nasty, old lady. Mrs. Holland wants a priceless ruby, and the journal Sally got from Marchbanks not only tells the truth about Sally's childhood in India, but the whereabouts of the ruby. Sally doesn't have time to read a lot of the journal before she falls asleep on the train - and when she wakes up, the journal is gone.

Sally moves out of her mean aunt's house once it becomes clear that her relative doesn't believe her about the events surrounding Sally's father's death. She is at a loss about where to go, until she remembers the friendly photographer she met in Kent, and goes to see him. Mr. Garland lives with his sister, an actress, and they are barely getting by, even though Frederick is a talented photographer. Sally, who was raised by her father, and may be lacking in traditional ladylike accomplishments, is a brilliant accountant, and is offered room and board with the Garlands in return for doing their book keeping. Now Sally just has to figure out why she keeps having horrible nightmares about a night in India long ago, avoid the murderous clutches of Mrs. Holland and solve her father's murder, as well as discover where all his missing money went.

Sally is a plucky and resourceful heroine. Her aunt disapproves of her because her father never sent her to school, but taught her himself. As a result, Sally knows how to shoot a pistol, keep books and read scientific and maritime texts, but has very little grasp of classical literature, embroidery and other things a well-brought up young Victorian lady should know. Sally's skills stand her in good stead when she leaves her aunt's house, however, and befriends the Garland siblings and moves into their colourful household. She has to escape murderous fiends, figure out her father's murder, and find her own way in the world after her father's death.

The book is aimed at a younger readership than Pullman's Dark Materials readership, and this book is a lot less complex than Pullman's most famous trilogy. But it's a fun adventure book for kids and Sally is a very admirable heroine and role-model. I look forward to reading about her continuing adventures in the rest of the series.
Posted by Malin at 15:25