I refuse to spoilertag anything in this review, because people, this book is nearly 200 years old. You've had ample time to read this book, if anything in my review spoils it for you, on your own head be it.

Captain Robert Walton writes letters to his sister Margaret, recounting his journey to the North Pole in a quest for scientific fame. He writes of the strange and charismatic man they rescue in the wilderness, a Victor Frankenstein. Through Walton's letters, we also get Frankenstein's tale of terrible hubris, as well as the story within the story of the creature Frankenstein in his arrogance created and abandoned to ultimately wreak havoc.

The son of a rich and loving parents, Victor Frankenstein is able to pursue his dreams as a student of science and natural philosophy. He goes to Ingolstadt in Germany and becomes obsessed with the idea of reanimating dead matter. He labours for years with his theories and eventually creates a disfigured giant cobbled together of all sort of scavenged corpses and manages to infuse the creature with life. He's so horrified by its yellow skin and ghastly visage that he runs away from the flat where he conducted his experiments and promptly has a nervous breakdown.

Being a scientific genius doesn't go so well for Victor Frankenstein. The creature he created and then ran away from is a sentient being, not all too pleased that its creator made it into such a terrifying monster. The creature longs for companionship and friendship, but has been met with only shrieks of terror and rejection whereever it goes. Victor meets the creature again, after becoming convinced it murdered his younger brother and allowed an innocent woman to hang for the crime (he's not wrong). The monster has taught himself to speak and reason and rails at his creator for basically giving him life he never asked for and then abanoning him to a life of loneliness and despair. He demands that Victor make him a companion, as he, like all living creatures is entitled to a mate and happiness.

Victor goes off into the wilds of Scotland to create a bride for the monster, but is so plagued by guilt because of the actions of his first creation that he cannot go through with it. He destroys the female he was making, causing the creature to appear and swear his vengeance. Suffice to say, things don't go well for Frankenstein, or most of his extended family and he eventually ends up nearly frozen to death in the Arctic telling his story to an explorer.

Frankenstein was not what I expected, mainly because most of my impressions come from pop culture references and my knowledge of movies (none of which I've actually seen). I was pretty sure there wasn't going to be a a mob with pitchforks trying to kill anyone, or a hunchbacked servant with a lisp or Victor Frankenstein triumphantly exclaiming: "It's alive!" but I wasn't expecting to feel so much sympathy with the creature, who really is dealt a very shitty hand. It goes on quite the murderous rampage throughout the book, which isn't exactly a nice thing to do, but I feel that Victor bears at least half, if not more of the blame, as he is the one who imbued a freakish patchwork of corpseparts with life and then ran away, forcing the creature to fend for itself. If you're an awful and neglectful parent, you don't get to turn around and be upset when your child turns out less than stellar in the morals department.

While I didn't exactly love the book, it was very interesting to me, and I am in awe of young Mary Shelley who started the book when she was 18. On a dare. Really, that girl was wicked talented. Her Frankenstein is so much more of a lasting classic than the poetry of her then much more famous husband and still inspires people today. One of the reasons I wanted to read the book was so that I could finally start watching Frankenstein, M.D, from the creators of The Lizzie Bennet Diaries and Emma Approved. I love getting my classics retold in YouTube video form, it seems. I wasn't expecting such a sophisticated book. The story within a story within a story narrative, the philosophical and moral quandries that are discussed throughout the the book, the genuine horror of the situation - girl is a genius. The book is frequently described as the first science fiction novel, and it's certainly a very good creaping horror story. Having read up on her on Wikipedia before writing this review, I also had no idea just how awesome a lady Mary Shelley seems to have been, and how scandalous her relationship with Percy Shelley actually was.

I will leave you with this webcomic by the extremely talented Kate Beaton: 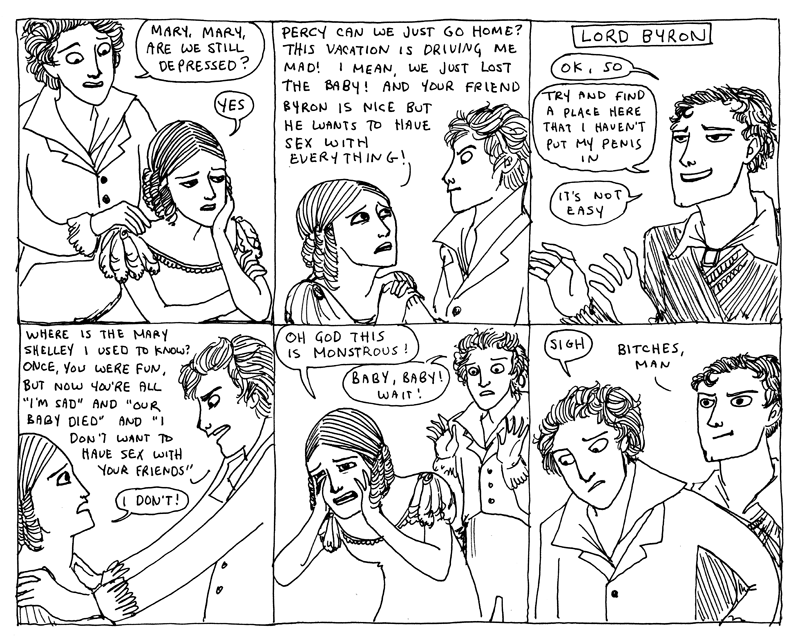