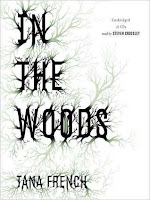 This book, which is quite long (longest audio book I've listened to to date) gives the readers two mysteries for the price of one. Back in 1984, three 12-year-olds went missing in the wood of a Dublin suburb. Search parties eventually found one of them, Adam Ryan, clutching a tree trunk in catatonic terror, several rips at the back of his t-shirt and his shoes filled with blood. His two friends, however, were gone without a trace. Adam didn't remember anything since entering the wood in the afternoon.

Twenty years later, Adam Ryan goes by his middle name, Robert, and is a murder detective on the Dublin Murder Squad. He keeps his past secret from his colleagues, with the exception of his partner and best friend, Cassie Maddox. He still doesn't remember anything from that fateful day, and prefers to keep it that way. Rob and Cassie find themselves as the primary investigators of the murder of a young girl, found beaten, strangled and left on a sacrificial altar at an archaeological site in Rob's old home town. The case, when they start investigating, bears a lot of parallels to the disappearance of Rob's two best friends, but despite this, Rob insists on keeping his connection to the earlier case secret from his colleagues and claims he's fine to continue investigating the murder.

The case turns out to be a tricky one. Katy, the young victim, was a talented ballet dancer, about to go off to the Ballet Academy on a full scholarship. Her abilities had garnered a lot of press attention - could she have been killed by a crazed fan or a paedophile? Katy's father had received threatening phone calls due to his involvement with the "Move the Motorway" campaign, trying to protect the archaeological remains from a scheduled motorway expansion. Ryan and Maddox also get seriously off vibes from Katy's family, with Katy's twin Jessica being nearly catatonic, the older sister Rosalind strangely anxious and overprotective, the mother being nearly indifferent and the father with clear anger issues.

As the investigation progresses, Ryan is forced to delve into his past, gradually uncovering snippets of memory as he walks the streets and countryside of his old home. Can Katy's murder shed a light on the unsolved mystery of his friends' disappearance? Will Ryan crack under the stress he's experiencing, before either case is solved?

I rarely read mystery novels anymore, but my book twin on the internet Narfna/Ashley loves Tana French's books so much and recommended the audios when I got concussed. While I don't think I loved the book quite as much, it was an entertaining read, and Steven Crossley, the narrator, does a really good job. The reason I can't unreservedly love the book is partly due to the length. This is a police procedural, which really does go into minute detail about all the aspects of a murder investigation. Sometimes I think maybe too much time was spent on investigating things that went nowhere.

My main gripe with the book is the protagonist, Rob himself. I was deeply uncomfortable with his decision not to tell his superiors about his connection to the old case. As the investigation went on and he started going more and more off the rails, I also felt he should have been astute enough to step back and stop seriously jeopardising the whole case. He started making some bad choices and kept going making worse and worse ones. I loved his friendship with Cassie and absolutely hated where his breakdown caused them to end up. Because I spent quite a lot of the book wanting to shout at or punch Rob in the face, it was difficult for me to entirely care if either of the cases actually got solved.

I really liked that the book wasn't mainly a who-dunnit, that so much of it was a psychological study. For anyone who wants clear-cut, set in stone answers, this book is probably going to be deeply frustrating. I can very much believe that there isn't always an easy answer in real life murder cases, though, so I didn't really mind that aspect. I loved Cassie, and really liked Sam O'Neill, the other detective who helps investigate the case. I was really intrigued by where the case ended up going, but Rob's poor lack of judgement kept me from more than just liking this book. The next book in the series is apparently all about Cassie, though, so I will be getting that one just to spend more time with her.

Crossposted on Cannonball Read.
Posted by Malin at 00:05