First of all, I want to thank the ever lovely Mrs. Julien, who kindly sent me an Amazon gift card during my continued convalescence. Part of that gift card financed this story.

This novella follows four full novels and a novella, which while they're not strictly necessary to get the full impact of the story, are well worth reading. Start with A Week to Be Wicked, it's amazing!

Miss Elinora "Nora" Browning grew up next to and was taught lessons along with George Travers, Lord Dashwood. She was in love with him for years, until he humiliated her during her season and went off to explore the world without a word of farewell. Utterly dejected and heart-broken, Nora comforted herself with sherry and wrote down all her feelings in the missive Lord Ashwood Missed Out - note the clever way of disguising the identity of the cad who disappointed her, there. Speaking on behalf of all overlooked young women, encouraging them to love themselves instead and not rely on any men, her letter became published as a pamphlet and became a huge bestseller. In the little coastal town of Spindle Cove, a safe haven and retreat for all manner of unorthodox ladies and spinsters, Miss Browning is a sought-after speaker and she's on her way there when a gathering snow storm delays her. The only carriage available to her contains none other than her old neighbour, Lord Dashwood.

Having traveled the world on several expeditions, now a renowned cartographer, George is back to settle down and get married. He discovers that in his absence, Miss Browning's pamphlet has pretty much maligned his good name, and Lord Dashwood would very much like to have a word with her about that. When their carriage is overturned in the storm, and the two are stuck alone in a tiny cabin, he challenges her to show him exactly it was she claims he missed out on. Hijinks, and activities of an unclothed variety ensue, despite the no doubt freezing temperatures.

Meanwhile, in Spindle Cove, the ladies waiting for Miss Browning are worried because she hasn't shown up, and all the heroes of Ms Dare's previous Spindle Cove novels ride off to find the authoress (after making sure they leave their wives more than satisfied).

I was very much looking forward to Tessa Dare's return to Spindle Cove, and she's written at least one absolutely delightful novella in the past, so I had high hopes for this book. Sadly, in a story that isn't all that long, far too much focus is placed on the inhabitants of Spindle Cove loyal readers already know, like Bramwell and Susanna from A Night to Surrender; Colin and Minerva from A Week to Be Wicked; Thorne and Kate from A Lady at Midnight and Griff and his duchess, Pauline, from Any Duchess Will Do. It's Pauline's lending library that Nora is scheduled to visit and there is added complication because Griff, the Duke of Halford was supposed to bring sherry to the signing, and has completely forgotten to procure any. So when he has a chance to get back into his lady's good graces and possibly locate some sherry at the same time, he drags his male friends along with him to locate the missing Miss Browning. It's not that I didn't like seeing glimpses of the happy lives these characters have made for themselves, but since this novella clearly, in part, was to set up youngest Highwood sister Charlotte's future romance, we could have had a bit more focus on her, and less on past characters.

Because the action cuts between the snowbound adventures of Nora and Dash, as he's known to his friends and the Spindle Cove gang, the central romance kept getting interrupted just as it started getting interesting. I would have liked a bit more back story and motivation for both Nora and George and I live in a (normally, if not yet this year) icy and snowy country. There is just no way that icy winds and blizzard-like snow storms doesn't kill ardour right quick. Having an extended kissing and embrace sequence, while locked half-naked out of doors in icy wind - nope. Then getting all amorous in what is most likely a drafty old shepard's hut? 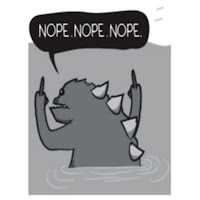 I can suspend my disbelief pretty far for you, Ms. Dare, see the Regency cos-players, but that's a step too far. You broke all the disbelief I have. You made me bring in Godzilla to help me make my point.

I did like both Nora and Dash as characters and can understand the motivations of both in as much as they were explained within the story. I thought the proposal scene was adorable and the grand gesture in question made me rather mushy (I blame hormones), but because I liked the main couple of this story so much, I wanted more time with them, and less with the previously established couples. I would say 4 stars for the bits with Nora and Dash, 3 stars for the bits with the old Spindle Cove characters, making it a 3.5 in total. I hope that Charlotte's book, when that finally arrives some time early in 2016 is more satisfying overall.

Crossposted on Cannonball Read.
Posted by Malin at 20:11