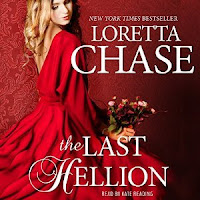 Another re-read of one of my all-time favourites, once again narrated by the excellent Kate Reading.

Vere Mallory becomes the Duke of Ainswood after pretty much every other male in his family line dies, including several family members he cared deeply for, and he's quite happy to drink and debauch himself into an early grave so the accursed title can't take anyone else, thank you very much. An endless existence of carousing gets tedious after a while, though, and once he crosses paths with Miss Lydia Grenville, the formidable investigative female journalist doing her best to inspire reform in London's poorer areas, ending up quite humiliated after their first encounter, he finds something new to keep him occupied and challenged.

Miss Lydia Grenville was trying to rescue a confused young woman from being abducted by one of London's most notorious madams when the giant nobleman got it into his head to interfere, and while she managed to outwit him and leave him as a laughing stock, she can't seem to get Vere Mallory and his impressive physique out of her mind. When he starts taking an interest in her career, showing up everywhere she goes, she concludes he's decided to make a conquest of her. While Lydia is a confirmed spinster and hasn't really had the time or interest in men before, the dissolute Duke of Ainswood appeals to her like no other. While she wishes she could remain unaffected, she's just as attracted to him as he is to her. How can she make sure he forgets her and takes his interest elsewhere?

Loretta Chase's Lord of Scoundrels still features on most "Must Read Romance" lists you can find on the internet. While that is a perfectly fine book, I find the hero frustratingly dumb for much of the book, and much prefer this one, which is loosely connected with it. Vere Mallory is one of Dain Ballister's best friends (and drunkenly confuses the heroine Jessica for a harlot in a memorable scene). Bertie Trent, a secondary character in this book is heroine Jessica Trent's bumbling brother, yet surprisingly finds happiness in this one, in a very satisfying secondary plotline. I think Vere is a much better hero than Dain. He starts out a bit arrogant and full of himself, but like all the best heroes, knows well enough when he is facing off against someone far superior to himself and that such a woman is not to be feared or avoided, but rather claimed, cherished, encouraged and honoured.

That Lydia Grenville shares her name with my BFF and the sister of my heart doesn't hurt, but I challenge anyone not to love Miss Grenville and her tireless quest to improve the straits of those worse off with her critical journalism. That she's also secretly the author of the wildly popular romantic adventure story "The Rose of Thebes" is just a bonus (and I would kill to get my hands on a full version of that - wonder if Loretta Chase could be persuaded to write it). The illegitimate daughter of a Ballister cousin (so a gently reared noblewoman) and a rather unsuccessful actor, Lydia was raised by eccentric relatives after her mother died early, her father ended up in debtor's prison and her younger sister died in the same prison. At 28, she's pretty much accepted that she's going to be a spinster and even if she does give into her lust for the Duke of Ainswood, it's not like she'd ever be a suitable match for him.

This book is so much fun and the two very stubborn and headstrong protagonists facing off against one another is delightful. While this is my fifth re-read of the book, I'd forgotten Vere's wonderful habit of referring to Lydia in his mind with new nicknames every time they encounter one another. "Attila the Hun" or "Ivan the Terrible" Grenville are probably my favourites. Vere's rather unorthodox courting of Lydia is resolved about halfway through, when the book changes pace and the couple have to work together to locate Vere's young cousins, who have run away from home to come see him in London, and fall into the clutches of the very same madam Lydia has been working to take down.

While I freely admit that this book is probably not going to be a favourite for everyone, it's still a very good example of Loretta Chase's excellent plotting, banter and skill. I find something new to love in it every time I revisit it, and highly recommend it as a classic of the genre.

Judging a book by its cover: The audio book cover for this seems hilariously inappropriate, because with the exception of the cover model having long blond hair, the simpering, contemplative pose with the pretty dress and the flowers is pretty much the opposite of everything Miss Lydia Grenville embodies. Dressed in severe and sensible black for much of the novel, Lydia is fierce, stubborn, no-nonsense and a far cry from he demure and insipid lady on this cover. The pastels and wind-blown look of the heroine on the paperback cover I have aren't exactly fitting either.

Crossposted by Cannonball Read.
Posted by Malin at 19:06