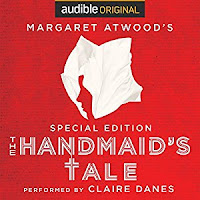 There's been a whole bunch of reviews posted for this book already, so I'm not going to spend a lot of time recapping the plot in my own words. Goodreads can help me out here:

Offred is a Handmaid in the Republic of Gilead. She may leave the home of the Commander and his wife once a day to walk to the food markets whose signs are now pictures instead of words because women are no longer allowed to read. She must lie on her back once a month and pray that the Commander makes her pregnant, because in an age of declining births, Offred and the other Handmaids are valued only if their ovaries are viable. Offred can remember the years before, when she lived  and made love with her husband, Luke; when she played with and protected her daughter; when she had a job, money of her own and access to knowledge. But all of that is gone now...

I've kept putting off this review, because I know it's going to be a really difficult one to write and I want to do the book justice. Obviously, I had heard of The Handmaid's Tale long before Hulu announced that they were going to adapt it into a mini-series (the first episodes of which are now available to view, not that I have the emotional strength to do so yet). One of my favourite works of literary fiction of all time is The Blind Assassin, another of Atwood's novels, but this is probably still her most famous and well-known work, all the more so now that it's become all too terrifyingly timely.

Written back in 1986, the book was meant to be a work of speculative fiction, a dystopian sci-fi with a more feminist bent than 1984 or Brave New World (Atwood herself claims this book isn't really just about women's rights, but human rights, and I wonder why it's so scary to her to be furthering the feminist cause). Who knew that with the current political climate, this book feels more scarily prescient now than ever before. The grim dystopian future of this novel seems to be lurking just around the corner, much more likely to come to pass now, than in 1986, when the book was written.

As I already mentioned, I don't think I in a stable enough place emotionally to watch the TV adaptation. Listening to the book (this is the new all-cast edition), for the most part narrated by Claire Danes, was difficult enough. To begin with, in the first chapters, the dry, slightly detached way Danes narrates Offred's words felt a bit off-putting, but I understand why she chose to do it the way she has - it gives the readers the impression our narrator may be in shock or emotionally cut-off in some way, which I suppose you might be if your days were those of Offred and the other Handmaids.

Stripped of everything, even her name, Offred is nothing but a walking womb. She's not allowed to smoke or drink alcohol, she's fed a nutritious, rather unexciting diet to ensure she stays healthy. She has to go for a walk every day to stimulate the circulation. Every month, there is "the Ceremony", where she has to lie in the lap of the Commander's wife, holding the hands of a woman who clearly resents her presence, and be raped by the Commander, in order to conceive a child. It's suggested in the book that each Handmaid is living on borrowed time. If she doesn't successfully conceive within three years, she's sent away to "the Colonies" to clear away nuclear waste, along with the other undesirables in society.

Women have no rights in the Republic of Gilead. While Serena Joy, the Commander's wife, lives a life of privilege, she cannot give birth herself, hence the need for a Handmaid. While she's rich and prominent, the house and all the money belongs to her husband, the Commander. She's not allowed to read or make any of her own decisions and is in many ways more confined and house-bound than Offred, who at least gets to walk outside once a day (never alone, always in the company of another Handmaid). Women are divided into three categories. The wives, the Marthas (domestic servants, no good for childbearing) and the Handmaids - women who before the fall of the old society had proven their fertility, but were considered fallen in some way. Only the most prominent members of Gilead can be assigned a Handmaid. Poorer men can have econo-wives (not much was said about these women).

In a society where the American government is already trying to police women's reproductive rights, limiting the rights to abortion and contraception, where Vice President Mike Pence states that he cannot have a meal alone with a woman who's not his wife, and wealthy Western women travel to India or other poor countries to have women act as surrogates for them, the grim reality of this novel no longer really feels like speculative fiction, but a glimpse into a future we must fight to avoid. It no longer seems like a strange and unlikely scenario, which is obviously why both the novel and the TV adaptation feels all the more important right now.

I cannot say that this book was a pleasant reading experience and while listening to it, I pretty much had it confirmed why I've put it off for so long. It's a terrifying and harrowing story, and not at all meant to be easily digested entertainment. I wanted to have read the source material before watching the TV adaptation, though, and it feels like this book should be required reading for everyone. I'm just worried some people will see it more as the blueprint for the new and controlling society they want to introduce, rather than as a warning.

Judging a book by its cover: There's been a lot of editions published of this book over the years, and the covers are almost always excellent. My Audible audio edition has a very simple cover, with the bright red background and the silhouette of a handmaid, the only white being her distinctive hood and the lettering. It's a very stark, yet nevertheless effective image. This book doesn't need a fancy cover to sell its contents.

Crossposted on Cannonball Read.
Posted by Malin at 10:23