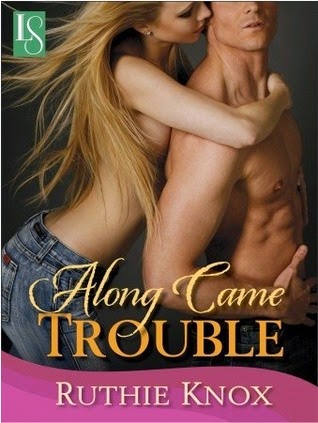 Disclaimer! I was given a free copy of this through NetGalley in return for a fair and honest review.

Single mother and entertainment lawyer Ellen Callahan just wants to live a quiet life, which is not as easy after her twin brother, an international pop superstar, fell in love with and was photographed spending time with her pregnant next-door neighbour. Now she keeps having to throw paparazzi off her lawn, which is vexing, to be sure, but it's not like she needs a bodyguard.

Her brother disagrees, and Ellen finds security expert Caleb Clark on her doorstep, determined to do his job, whether Ellen likes it or not. The locks on her doors are flimsy, she hasn't got adequate lighting on her porch, her yard is completely open for anyone to wander in - it's a nightmare from a private security point of view. Ellen grew up in her famous' twin's shadow, always pushed to the side by their ambitious and fame-hungry mother. She then went on to nearly abnegate herself completely during her marriage to a narcissistic, cheating alcoholic, but finally had enough when she discovered she was pregnant and demanded a divorce. Having spent the last few years, raising her boy alone, learning to be self-sufficient and independent, she is not about to have anyone tell her how to run her life or fence her yard, not even someone as handsome and charming as Caleb.

Having spent years on deployment in Iraq, Caleb feels a heavy responsibility to take care of his family after such a long time away. His mother is over-protective and still clearly convinced he'll up and leave them at any second. His father, always vibrant and physical in the past, is recovering from a stroke and can no longer take as active a role in managing the apartment complex he owns. Caleb's younger sister Katie shares a house with him, having returned after nearly a decade in Alaska without her boyfriend and no apparent wish to talk about the subject. The security business he started on his return to Camelot is still in the early stages of development and a high profile client like Jamie Callahan is Caleb's chance to really make it a success. So he really needs to convince both Ellen and her neighbour, Carly, neither of whom seem interested in listening to him at all, that they need to adapt to change their behaviour and shield themselves from the sudden press attention, or he's going to be replaced real fast. The raging attraction he feels towards his client's sister is a complication he wasn't expecting at all, and it's causing quite a lot of complications when he really needs to keep his focus crystal clear.

I'm making a concerted effort to read a whole bunch of the books I've been granted through NetGalley in the past year or so, and it seems that every time I go digging and pick up one of the books, I am so very pleasantly surprised and regret not reading the book ages ago. This book is no exception - it's just such a delightful contemporary romance, between two head-strong individuals who nonetheless seem very realistic. Even though Caleb is determined to keep their relationship purely professional, as he's working for Ellen's brother, his resolve lasts for less than forty-eight hours after actually meeting Ellen, helped along by both his old friend Carly and his sister Katie. Ellen doesn't exactly have a lot of casual experience with men. but decides she wants a no strings attached fling with Caleb, the first guy she's really been interested in since her marriage ended. Caleb, who as well as being very attracted to Ellen, starts bonding with her little boy Henry the minute they meet, rather quickly realises that he wants something a lot more permanent with the stubborn and opinionated lawyer.

In addition to the main romance between Ellen and Caleb, there's the secondary plot involving her brother Jamie and Carly, who are already in the complication part of their romance when the book kicks off. Really interestingly, it seems Knox initially set out to write about a Justin Timberlake-alike pop star falling in love, but the secondary characters kept stealing the scenes, so she retooled the book to be about them instead. When the book starts, Jamie is off in LA, having fled Camelot after he and Carly was caught on camera by a paparazzi after a somewhat careless post made by Carly on her blog. A big argument later, and the two are separated. Carly has spent years trying to get pregnant, only to find that by the time she achieved her goal, her husband no longer really wanted her or the baby. Then, already pregnant and determined to be a single mum (inspired in part by Ellen next door), she met Jamie and they fell in love. It's clear that Jamie, while a nice guy, has never really met many challenges, having been spoiled and pampered by his fame-hungry mother, then living the life of a celebrity. He's never had to fight for anything at all in his life, and having to really work to win Carly back, is oh so good for him.

Both Ellen and Caleb are professionals who are very good at their jobs. They start out with very different expectations for their relationship. Ellen needs it to be very casual, because having been submissive to people for so much of her life, only to finally establish herself as a competent, independent and self-sufficient woman and mother after her divorce, she's afraid to rely on anyone else ever again, believing it will lead to her becoming subjugated and weak again. Caleb, having spent so long as a soldier in dangerous areas of the world, has none of Ellen's confidence issues. Returning to his home town and seeing how much his family members need his help now, he's got no problem with the idea of settling down himself, and getting a ready-made family in Ellen and Henry (who he insists calling Hank every chance he gets, because he loves how it annoys Ellen) would just be a bonus.

One of the things I really liked about the book is that both the primary and secondary heroine are single mothers, one who's already proven that she can manage to raise her child more or less on her own, with her friend determined to do the same, while both the heroes, Caleb and Jamie, seem to have absolutely no problems stepping into a fatherhood role for kids who are not their own biological offspring, without this in any way diminishing their masculinity in any way. Frankly, I found both of  them more attractive exactly because they were so willing to step up and take an active paternal role to children not originally their own.

This is only the second ever Ruthie Knox book I've ever read, but based on the way she writes really relatable and believable protagonists, as well as a fully formed cast of really nice supporting characters, I really should make it a priority to check out more of her books as soon as possible. I plan to glom my way through the entire Camelot series on my way to finishing my Cannonball.

Crossposted on my Cannonball Read.
Posted by Malin at 22:53