#CBR6 Book 86: "Match Me If You Can" by Susan Elizabeth Phillips 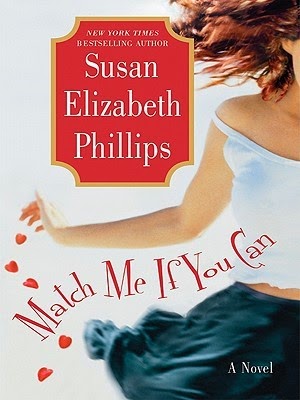 Annabelle has taken over her dead grandmother's matchmaking service, and is determined that this is the business she will actually manage to make successful. Her mother wants her to become an accountant (her successful older brother could get her a job in his firm), but Annabelle is having none of it. Of course, making a living as a successful matchmaker is difficult when most of her current clients are her grandmother's old clients, mainly pensioners, who insist on getting the same prices as they did twenty years ago. If Annabelle could just get Heath Champion, Chicago's most sought-after bachelor as her client, and actually find him the woman of his dreams, she's convinced that her business will be a success.

Heath Champion, sports agent extraordinaire, popularly nicknamed "The Python" in business circles, is indeed ready to find himself a wife. Because he is busy wheeling and dealing and hand holding top athletes all over the country, he's already hired Portia Powers from the top matchmaking firm in Chicago to find him promising candidates. So when a flustered redhead in a wrinkly yellow suit shows up at his office, late for her appointment, to try to convince him to use her services instead, he's inclined to tell her to get lost. She is the close friend of his top client's wife, though, and amuses him with her tenacity. He agrees to let Annabelle set him up for one date, and if he likes the woman, he'll sign with her agency too.

Portia and Annabelle become rivals in trying to find Heath's perfect woman. Their job is made more difficult in that Heath usually only sets aside twenty minutes for each candidate, and after a few meetings, insists that Annabelle sit in on all the meetings to make conversation flow more smoothly. Portia is furious that a badly dressed, flighty amateur seems to be moving in on her turf, and to make matters worse, Heath's menacing thug of a driver is trying to blackmail her into dating him.

I'm not spoiling it for anyone when it's obvious from early on that Annabelle is Heath's perfect match and he just needs to put down his mobile phone and get out of the office for long enough to realise it. With an utterly miserable childhood, I'm not surprised that he wants a stable and idyllic family life for his future (isn't this the case for at least half of all heroes in Romancelandia, be they historical or contemporary)? He goes about finding his dream woman in a very cavalier way, though, and as Annabelle is the only woman he spends any time with for more than about twenty minutes to an hour for most of the book, I'm not surprised she's the one he falls for.

To be fair, Annabelle is awesome, and I can absolutely see why she'd want to make her own way rather than settle into her family's expectations for her. She's clearly kind and sees the best potential in people, and still hurting from her broken engagement - because her fiancee didn't tell her until fairly late in the game that he actually wanted to become a woman. That's going to make you wary about new dating experiences. She finds Heath exasperating, but is one of the few people who dares tell him to his face that he's being horrible, and tackles every challenge her failing matchmaking business throws at her with a sense of humour and a determination to succeed.

The secondary romance between Portia and Bodie (who's not really just Heath's driver, but his best friend) is also fun and Portia has to change her snobbish perception a lot, not to mention change her own priorities to make things work out in the end. It's due to her own romantic journey that Portia in the end figures out exactly how to get Heath the woman he most needs in his life, and helps him to grow truly worthy of the lovely Annabelle. Cause yeah, Heath is quite a lot of a d*ck for a lot of the book, and while he has good looks and wealth going for him, he also has a deplorable personality and is a workaholic. It takes him a long time to come up to prove that he's worthy of her, but he gets there in the end.

This book would also have been more enjoyable if I hadn't read and loathed This Heart of Mine. The Tuckers and the Calebows are frequently appearing and important supporting characters in this one, as Molly and Annabelle went to college together and Heath is trying to move heaven and earth to get into Phoebe Calebow's good graces, after screwing up a business deal with her years ago. It's hard to fully enjoy a book when you hate several supporting characters. If you haven't read other books in the series, though, and you like a romance with some quality banter, this is not a bad one to pick up.

Crossposted on Cannonball Read.
Posted by Malin at 14:14