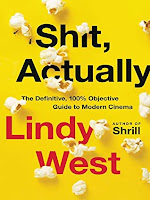 Page count: 272 pages
Rating: 4 stars
Official book description:
New York Times opinion writer and bestselling author Lindy West was once the in-house movie critic for Seattle's alternative newsweekly The Stranger, where she covered film with brutal honesty and giddy irreverence. In Shit, Actually, Lindy West returns to those roots, re-examining beloved and iconic movies from the past 40 years with an eye toward the big questions of our time: Is Twilight the horniest movie in history? Why do the zebras in The Lion King trust Mufasa--who is a lion--to look out for their best interests? Why did anyone bother making any more movies after The Fugitive achieved perfection? And, my god, why don't any of the women in Love, Actually ever fucking talk?!
From Forrest Gump, Honey I Shrunk the Kids, and Bad Boys II, to Face/Off, Top Gun, and The Notebook, West combines her razor-sharp wit and trademark humor with a genuine adoration for nostalgic trash to shed new critical light on some of our defining cultural touchstones--the stories we've long been telling ourselves about who we are.
At once outrageously funny and piercingly incisive, Shit, Actually reminds us to pause and ask, "How does this movie hold up?", all while teaching us how to laugh at the things we love without ever letting them or ourselves off the hook. Shit, Actually is a love letter and a break-up note all in one: to the films that shaped us and the ones that ruined us. More often than not, West finds, they're one and the same.
This is the first book I have ever read by Lindy West. I should undoubtedly read both Shrill and The Witches are Coming, but in this corona-ridden dystopia we are currently living in, fighting my reading slump rather ineffectually since depression keeps kicking my ass, I was in need of something easy and fun to read. Snarky movie reviews seemed absolutely perfect, and I'm happy to report that I finished this book in less than 48 hours, which is almost a record for me this year. Sad, but true.
Had I watched all the movies that West covers? No, but the vast majority, because I am a huge fan of big trashy, blockbuster cinema. I'm upset that she doesn't cover gems like Pacific Rim in her book, because that is a glorious movie spectacle. Nevertheless, I did get her opinions on The Fugitive (which between West's write-up in this book, and John Mulaney's stand-up, I don't really feel I need to ever watch - I've gotten all that is best about it already), The Rock (I'm never going to apologise for how much I love this film), Twilight (frankly better than it should be, shame the director didn't get to continue the series), Face/Off (so dumb) and a number of other great and not-so-great movies.
Pre-corona, going to the cinema was one of my treats. It really was a kind of self-care for me, and while going to the cinema with my husband or friends was good, going by myself and sitting in a dark theatre, with my popcorn, overly sugared beverage and quite probably my knitting is one of my favourite things to do. Thanks to the excellent baby cinema program here in Oslo (on weekdays around lunch time, they offer screenings for parents with babies/toddlers), where the lights are dimmed rather than turned off entirely and the sound isn't as loud), I went to the cinema as soon as possible after having my baby (about three weeks after my c-section) and kept going once every two weeks or so until my little boy was too energetic and demanding for me to get anything out of the movie. The things I miss the most from pre-corona society are probably hugging and going to the cinema.
As I don't drink alcohol and am generally quite indifferent to a lot of music, I don't really miss bars/pubs or going to concerts, but man, I miss the cinema. So Lindy West's book allowed me to revel in the joys of prepostrous plots, over the top action sequences, cheesy characterisation and all the other things you frequently find in really popular movies. Is this book great art? No. But it's a fun read, especially if you have at least a passing knowledge of most of the film she covers in the book and it made me forget about our rather dreary present for a little while.
Judging a book by its cover: Very appropriately, this cheerful, butter yellow cover is sprinkled all over with popcorn, which a guide (however irreverent) to modern cinema probably should be.
Crossposted on Cannonball Read.
AbortSpellChek
AbortSpellChek
Posted by Malin at 12:57 No comments:

Page count: 336 pages
Rating: 4 stars
Spoiler warning! This is book 6 in an ongoing series. There will be minor spoilers for earlier books in the series. You can read these without having any background, but it's always best to start at the beginning, which happens to be A Curious Beginning.
Intrepid lepidopterist and sometime crime solver Veronica Speedwell and her grouchy partner and now lover Revelstoke Templeton-Vane (goes by Stoker) are working on preparing a memorial exhibition at the Curiosity Club for one of its recently deceased members, pioneer mountain climber Alice Baker-Greene. Veronica finds evidence that suggests the woman was sabotaged and her accidental death while climbing in the tiny European principality of Alpenwald was, in fact, murder. While Stoker strongly opposes them getting embroiled in yet another potentially dangerous investigation, Veronica feels she must bring her findings to the attention of the exhibit's patron, Princess Gisela of Alpenwald. The royal chancellor of Alpenwald doesn't seem to think that there is much to investigate, but is soon forced to approach Veronica on a sensitive matter of state.
Shortly before the opening of the memorial exhibition, princess Gisela has disappeared without a trace. This is apparently something she does on occasion, but her current disappearance comes at a critical time. As well as opening the exhibit, meant to highlight the beauty and mountaineering opportunities in Alpenwald, the royal delegation was in London to sign a secret peace treaty. It's essential that Princess Gisela is seen publically at a number of important functions, and coincidentally, Veronica looks enough like the princess to act as her double with the right jewelry, outfits, and makeup. Sensing a chance to continue her investigation, Veronica agrees to masquerade as the princess and help the peace treaty become a reality. Naturally, as Veronica and Stoker seem to be magnets for danger and complications, the mission isn't exactly as simple and straightforward as it seems, and our brave protagonists find themselves in danger more than once before they are able to unmask Miss Baker-Greene's murderer.
I'm not going to lie, I'm delighted that Stoker and Veronica are now romantic as well as investigative partners. Of course, while they have now both declared their feelings for one another and acted on them, it's not necessarily smooth sailing in all aspects of their relationship, especially because Veronica has no wishes of ever getting married and fears being trapped. This could present a big problem for the couple, if Stoker wasn't so very observant and aware of all things Veronica. Considering his ugly and public divorce, it's not like her reputation would be noticeably more tarnished if they continue to live in sin, rather than tie the knot at a future date.
Stoker, however, would really prefer it if they stay out of the danger that investigating possible murders always brings. Veronica needs to work diligently to prove to him that there even is a case to investigate, but once they are both persuaded that a murder has taken place, they're not going to stop until justice has been served.
I don't exactly think this book did anything new, but if you're already a fan of Raybourn's brand of historical mystery with a romantic twist, you're going to get exactly what you want from this book. I was amused by all the moustaches adorning the Alpenwald contingent, and the fake one that Stoker was made to wear when out and about in disguise.
Judging a book by its cover: This series always has lovely woodcut-inspired covers and this one is particularly pretty. The blue colour is inspired by the official sky blue of the fictional principality of Alpenwald from the novel. The same with the delicate white flowers, which I'm assuming is supposed to be the St. Othild's wort flowers. I'm sad there aren't any otters, really. I get why the little Veronica silhouette is still sporting her trusty butterfly net, but she really hasn't done a lot of lepidoptery for quite a few books now, so I'm not sure it's entirely appropriate anymore.
Crossposted on Cannonball Read.
AbortSpellChek
AbortSpellChek
Posted by Malin at 10:58 No comments: