#CBR7 Book 79: "Far From the Madding Crowd" by Thomas Hardy 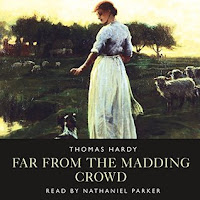 Farmer Gabriel Oak falls for the pretty, independent-minded and headstrong Miss Bathsheba Everdene pretty much the first time he sees her. He proposes to her, but is rebuffed, as she's unsure if she ever wants to get married. After losing his entire livelihood after one horrible accident, Gabriel has to go back to being a lowly shepherd and through a series of circumstances ends up working on for Miss Everdene, who's inherited a farm from her uncle and is determined to run and manage it herself.

While steadfastly and loyally working for the very woman who rejected him, Gabriel falls into the role of her reluctant confidant, watching her interactions with other suitors, the vain and arrogant Lieutenant Troy and the older, most prominent farmer in the area, Mr. Boldwood. While Bathsheba is an impressively independent and progressive woman in a novel written in Victorian times, she shows extremely poor judgement when it comes to men, something the narrator bemoans while being gently supportive of her wishes to run her own life.

Having sent Farmer Boldwood a Valentine in jest, mainly to catch his attention, poor Bathsheba is mortified when she realises that her tiny missive has made him interpret the situation all wrong, and she spends the next few years trying to fend off his semi-stalkery declarations of undying affection and increasingly more insistent proposals. Then the silly young woman gets taken in by the dashing red coat and the handsome face of Lt. Troy and ends up married to him, quickly realising that she's made a huge mistake. At this point, the book, which starts out as a quiet pastoral tale with some romantic undertones turns into a melodrama to rival even the most impressive soap opera.

My only previous experience with Thomas Hardy was Tess of the D'Urbervilles, which I had the great misfortune of having to read for English lit at University. To this day, I think it's one of the most relentlessly miserable books I've ever forced myself to read all the way through and I absolutely hated it. From what I heard about other Hardy books like Jude the Obscure and The Mayor of Casterbridge, it didn't sound like I would ever want to read anything of his literary output, and I would probably have stayed far away from this novel as well, if not for the current movie adaptation starring Carey Mulligan, making me curious. This review over on Smart Bitches, Trashy Books (warning: does get quite spoilery) and Bonnie's review, recommending the Audible version narrated by Nathaniel Parker, convinced me that maybe I should give Hardy one more try. I'm very glad I did.

On occasion, the book dwelt a bit too much on the pub conversations of the many, MANY rural farmhands working for Bathsheba or the minutiae of Victorian sheep farming, but I really did love Gabriel Oak and his quiet and steadfast devotion to the woman he loved, waiting around for her to come to her senses longer than I probably would have done. While initially I had some sympathies for Mr. Boldwood, who is overwhelmed by his belief that the pretty and vivacious Miss Everdene may have feelings for him, they gradually turned to impatience and frustration because he really would not take no for an answer. Way to live up to the "nice guy in the friend zone" stereotype, dude. I had no time at all for the odious Troy and wanted him dead of some sort of painful wasting disease.

Unless someone can convince me that other of Hardy's novels are more in this vein than the misery that was Tess, I severely doubt I'll be reading any others by him. I'm hoping to see the movie adaptation this weekend and am looking forward to seeing how the film holds up.

Crossposted on Cannonball Read.
Posted by Malin at 23:54