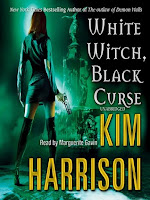 This is book seven in an ongoing series. Not the place to start. The review will also contain spoilers for earlier books in the series. Begin with Dead Witch Walking, if you're interested.

For someone who was really rather sceptical to anything but earth magic, considering even layline magic a bit suspect at the beginning of this series, independent runner (think supernatural private detective/bounty hunter) Rachel Morgan has sure come a long way. Now she's not only a fairly adept layline witch, but her blood (thanks to a rare genetic abnormality) can kindle demon magic and because of this, she's got a standing appointment every Saturday as an apprentice to an actual demon. Having once shuddered at the mere thought of demon magic, she's now willing to use all manner of spells, so long as no one gets hurt in the process.

In this book, Rachel and her roommate Ivy finally have some new leads on the individual who killed Kisten Phelps, Rachel's ex-boyfriend and Ivy's best friend (excepting Rachel). They are determined to track down the guilty party and get their revenge. In addition, thanks to the FIB psychologist, who can sense emotions, the residents of the little church discover that they have a ghost, and Rachel figures out who's been haunting them for more than a year. Not Kisten, but Gordian Pierce, a witch who Rachel temporarily summoned when she was 18, and helped get revenge on a child predator vampire. He was buried in their backyard, and has been stuck in the church since he was dislodged from his resting place after an altercation Rachel had with Al the demon. Rachel discovers she can see Pierce when they're both in the layline in her backyard, but Al comes and snatches the disembodied ghost with him to the Ever After, to use as his familiar. Rachel is livid, and decides that she's going to try to recreate the spell from when she was 18, to summon Pierce back and show Al once and for all that she is not to be messed with.

The ladies (and their pixie associate Jenks) have other serious business matters to attend to as well, after discovering that their friend, FIB Detective Glenn, the son of FIB Captain Edden, has been hospitalised after a brutal attack. Further investigation into the case reveals that the guilty party is a banshee and her husband. Banshees are pretty much the most dangerous supernatural Inderlander, because they syphon off people's life force to stay alive. Mia, the banshee in question, has a baby that she is willing to go to any lengths to protect, ad the supernatural branch of law enforcement, the IS, will do nothing to stop her. To complicate matters further, Ivy has a former connection to the lethal creature, and suspects that one of her actions is what enabled Mia to marry and have a child in the first place. Both Rachel and Ivy are determined to bring the deadly couple down, but Rachel quickly discovers that a toddler banshee is even more dangerous than an adult one.

Trying to avenge her ex-boyfriend's murder, capture a banshee and her serial killer husband, plus summon a ghost to prove to her demon teacher that she can't be pushed around is made even more complicated for a weakened Rachel by the fact that she's been shunned, because the Witch's Council for Moral and Ethical Standards believes she deals in black magic and is a demon practitioner. This means she can't buy supplies anywhere but the black market and anyone connected with her could get shunned as well. Her brother is appalled, her mother is sympathetic and understanding, but nevertheless decides to move across country to live closer to Rachel's brother. Marshall, the handsome witch she's been going on a number of platonic dates with for a few months can't handle the pressure. There is so much to deal with for Rachel in this book, possibly too much. With so may different story lines to deal with, it becomes difficult to know entirely what to care about.

I still enjoy the characters a lot, and Rachel has come such a long way. It's good that she finally gets closure on Kisten, and while Marshall turns out not to be strong enough to handle the chaos that is Rachel's life, a new potential love interest is introduced - or has Rachel finally learned from the mistakes of her past and learned to stay away from dangerous, morally ambiguous guys? There is very little Trent in this book, but quite a bit of Al.

This book is one of the bridging ones between the first half of the series, where all the characters are introduced and the second, where Harrison begins to reveal her end game. It ties up more of the plot strands left hanging from the last few books, and hints at interesting things to come. It's not one of my favourites, but it's still a fun read.

Judging a book by its cover: I really don't see why they keep giving the cover model portraying Rachel a gun, she's a witch and the only weapon she ever uses except her magic is a splat gun. In this, at least she isn't dressed all in leather in this cover. Not sure why there are cutouts on her elbows, that seems like a particularly bad fashion choice, even for Rachel. The gloomy green lighting and the creepy fountain seem appropriate, though.

Crossposted on Cannonball Read.
Posted by Malin at 01:35