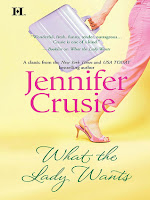 From Goodreads:
Mitch Peabody was learning pretty fast that the life of a private detective was nothing like the movies. He'd envisioned a world of tough-talking detectives and smart-mouthed, stunning dames. Instead he saw case after case of cheating husbands, suspicious wives and unsuspecting mistresses until she walked through the door. Right down to her stilettos, Mae Sullivan was a knockout with a lethal body–and a lethal family to go with it.

There was something not quite on the up-and-up about her, but she came with a case he couldn't afford to refuse and left him with a case of lust he hadn't had since high school. It didn't take long for him to fall for her, hook, line and sinker. But was Mae interested only in catching the double-crossing crooks who murdered her uncle or did the lady want to catch him?

This is yet another book that has languished on my TBR list for years and years because I got it in an e-book sale and then forgot about it. Jennifer Crusie has written some of my favourite amusing comfort reads, so every time I see one of her early books on sale that I don't already own, I get it. I don't necessarily feel any pressing need to read it right away, though, and so it likely gets forgotten about until it fits into some reading challenge or other that I'm doing, in this case, the Monthly Keyword Challenge.

This is also another book that while it was fun and diverting while I read it, is reduced from four to three stars by the time I review it, since I can barely remember the name of the protagonists less than three months later, let alone the intricacies of the plot (of which, there are a lot in this book, to be fair). Mitch Peabody works as a private detective (but only because of a bet, and as long as he can make a certain amount of money from his last job this year, he'll win and whichever judgmental friend and/or relative he was betting with (see, I really do NOT remember the finer details here or what Mitch used to do for a living before he became a PI) will be proved wrong. His possibly last case as a detective arrives in the form of bombshell Mae Sullivan, who needs to find the diary of her dead uncle. She won't tell Mitch WHY the diary is so important, though and as he starts investigating, it becomes clear that while it seems like the uncle died of natural causes, there were a LOT of people around with a motive to kill him.

Mae wanted a private detective she could easily manipulate, but Mitch proves to be not only much better at his job than she was hoping, but more attractive than she's entirely comfortable with. Since everyone seems to either fancy Mae or want to aggressively protect her, she doesn't seem unused to male attention. She's not very nice to Mitch to begin with, and he's downright rude to her. It's not a great basis for a romance, but I think it's supposed to evoke that old timey Hollywood banter, and a lot of (crazy, wrong) people seem to absolutely adore the verbal abuse that Cary Grant and Katherine Hepburn fling at each other in Bringing Up Baby, so what do I know?

The uncle who died was only one of Mae's influential and scary uncles. There's no end to the threats Mitch gets while he's working for and with her. He's stubborn, though, so it just makes him more determined to solve the case and win Mae over.

There's a truly ludicrous amount of twists and turns in the case. For quite a bit of the book, it's really not clear whether Mae's uncle died of natural causes or was murdered. If he was murdered, Mae is one of the chief suspects, but there's a lot of other candidates who might have offed him too. The mystery part of the story was probably more satisfying than the romance, but as I said, I had fun while I read it, and got through it in less than a day, so while it's not going to join the Crusie novels I re-read every now and then, I also don't regret paying money for it.

Judging a book by its cover: I genuinely don't even know what's going on with this visual assault of pastels and various fonts. So much yellow and pink, it's like an Easter basket. The original cover appears to have a film noir vibe with cartoony silhouettes against the window in the door of a detective's office, which seems a lot more appropriate. Disembodied leg and lady carrying a briefcase doesn't exactly scream light hearted detective romp, or romance, for that matter.

Crossposted on Cannonball Read.
Posted by Malin at 22:36