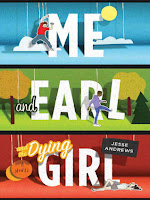 Page count: 304 pages
Rating: 2 stars
#CBR12 Bingo: Adaptation (was turned into a movie in 2015 - the film is way better than the book)
Official book description:
Greg Gaines is the last master of high school espionage, able to disappear at will into any social environment. He has only one friend, Earl, and together they spend their time making movies, their own incomprehensible versions of Coppola and Herzog cult classics.
Until Greg’s mother forces him to rekindle his childhood friendship with Rachel.
Rachel has been diagnosed with leukemia—-cue extreme adolescent awkwardness—-but a parental mandate has been issued and must be obeyed. When Rachel stops treatment, Greg and Earl decide the thing to do is to make a film for her, which turns into the Worst Film Ever Made and becomes a turning point in each of their lives.
And all at once Greg must abandon invisibility and stand in the spotlight.
Fair warning and a slight spoiler, just in case the title and book summary hadn't already tipped you off - Rachel suffers from leukemia, and she does NOT miraculously make it and beat the cancer at the end of this book. In many ways, a book with one of the three protagonists suffering from cancer seems like a very suitable reading choice for a Cannonball Reader. The book certainly shows what a sucky disease it is, and what an impact it can have both on patients and those around them.
Sadly, unlike The Fault in Our Stars, another YA book about teens with cancer, which was also released in 2012, this book isn't all that good. I watched the film adaptation on a plane a few years ago and found it diverting and quite funny and very sad in places (I really need to learn not to watch movie or read books that will make me ugly cry while flying). Having now read the source material, this is yet another example where the film is, in fact, better than the book, which doesn't happen all that often.
The main problem is that our narrator and main protagonist, Greg, isn't a very likable person. All the way throughout the narrative he keeps telling the reader what a bad story this is, calling the reader stupid and generally putting you right off the story. I get that it's supposed to be a quirky narrative choice, showing what low self-esteem Greg has and so forth, but after the second or third time it happens (seriously, it's every few chapters, it gets old real fast), it did, truthfully, make me want to give up and stop reading the book. However, I needed to read it for a number of reading challenges, I had liked the movie, and so I persevered, hoping that perhaps Greg and the book would improve if I continued.
Sadly, not so much. Greg remained a whiny, fairly emotionally stunted, really not aware of his privilege twerp throughout. I would much rather have wanted to read the story through his friend Earl's eyes, or even Rachel's. I don't know what else Jesse Andrews has written (this is his debut novel), but based on this, I'm not very keen to find out. As I said, the movie adaptation of this is perfectly sweet and has managed to make all the three teen characters likable. Watch that instead of reading this book.
Judging a book by its cover: Since this has now been filmed, there are editions with the inevitable movie tie-in cover, and there's also a fairly dull yellowy-green one with little white figures. I much prefer the one on my e-book which is colourful and fun and the three main characters are all shown as little paper dolls in what looks like some sort of puppet theatre.

Crossposted on Cannonball Read.
Posted by Malin at 02:50