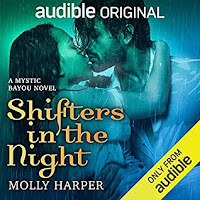 Page count: 300 pages
Audio book length: 6 hrs 43 mins
Rating: 3 stars
I was happily surprised when logging into Audible to discover that there was a new Mystic Bayou book out. Ever since a video went viral of a shifter going raging in a parking lot, the world at large has become aware that supernatural creatures exist and live among them. The existence of Mystic Bayou, a little southern town where humans and supernatural beings co-exist happily has also become public, and it's bringing in a lot more visitors, both through tourism and people who want to settle down in the town.
Lea Doe is very good at her job, which involves getting affordable housing built in various locations. As a deer shifter, she has the ability to read most people and creatures' emotions, something that is extremely convenient when negotiating and trying to liaise with the locals in the various places New Ground Construction work. While her boss normally lets her run the show and mainly stays behind the scenes, he seems to be acting much stranger than usual in Mystic Bayou, and she's not sure she's happy with his more active (and interfering role). Luckily, the town officials, led by mayor Zed seem very pleased to welcome her and negotiate what the housing development should look like. This is good because Lea is unusually preoccupied with the mysterious man she met in the woods when running in her hind form upon her arrival in the town.
Jon Carmody has lived as a recluse for a long time. He's a selkie and used to be the only available mechanic in town. In his youth, he had a close encounter with a kraken which left him pretty badly scarred and this is the reason he's mainly kept to himself and had all his groceries and other necessities delivered to his house on the outskirts of Mystic Bayou. After his brother Will returned to town to become its resident doctor and settled down with the formidable Sonia Fong from the League of Interspecies Cooperation, he's been feeling more lonely. His brother keeps challenging Jon to push himself out of his comfort zone, to start interacting more directly with people again.
Jon is very surprised to find a beautiful naked woman swimming on his property one evening, and can't really seem to get her out of his mind. He discovers that the beautiful woman is Lea Doe and despite his shyness and misgivings about his scars, he desperately wants to get to know her better. Will, Sonia and their other friends do what they can to arrange get-togethers where the two can meet up and circumstances also seem to keep throwing Lea and Jon together.
I'm going to be entirely honest, by now, the plots of these books (all of which I read over a fairly short space of time MANY months ago) are all blending together a bit, and as such, I can't really entirely remember what I liked and didn't about this one. The ever-increasing group of supporting characters who now feel like the cast of some quirky Southern-set paranormal sitcom are still a delight, the main romance in this was perfectly fine, but nothing that now sticks in my mind two and a half months later. If you liked the rest of the series, and have Audible Plus, so the book is free, it's a fine way to while away a few hours.
Judging a book by its cover: Not a huge fan. I'm guessing the characters are soaking wet on the cover because Jon is a selkie? Who knows. I don't think anyone is picking these books up because of the cover art.
Crossposted on Cannonball Read.
Posted by Malin at 22:10