This is the fifth book in the October Daye series, and this review may contain spoilers for events in previous books. It's also not the best place to start the series, go read the first book instead: Rosemary and Rue. My reviews of the other books in this series can be found by clicking the character name tag.

Sir October "Toby" Daye, changeling knight and private investigator, retriever and rescuer of lost children, has been grieving for year, due to the losses she incurred towards the end of One Salt Sea. While seemingly getting by, on the surface, fulfilling her responsibilities, training her squire, paying the bills, Toby is acting more and more recklessly, and her friends and loved ones are getting worried. When another of Duke Sylvester's knights show up on her doorstep, begging for her help to find his changeling daughter, Toby wants to refuse, but understands that she's the only one who can help him.

The very proper and correct Sir Etienne hadn't even realised he had a teenage daughter until his ex-girlfriend called him up, furious because she believed he'd kidnapped her. Etienne can teleport, and his daughter has the same power. Normally changelings are closely monitored by Faerie. Chelsea has incredible powers and none of the control that other changelings are taught. She's not only opening portals across huge distances in the mortal world, but opening realms that were believed sealed off and forgotten ages ago. If Chelsea keeps on opening the portals, it'll cause rifts in the walls between the worlds, and can endanger not only Faerie, but the mortal world as well.

Tybalt, King of Cats, has been keeping his distance, but Chelsea's out of control teleporting is endangering his realm and family as well, and he needs Toby's help to sort things out. However, there's dissention in the ranks at the Court of Cats, and while Tybalt may have nine lives, he's going to have to be very careful not to lose all the remaining ones to rebels set on stealing his crown.

While it took me a while to warm up to Toby as a character, and to the October Daye series in general (I didn't really get into it properly until book 3: An Artificial Night). She's tenacious, stubborn and very determined, brave to the point of idiocy and far too liable to throw herself into life threatening situations at the drop of a hat. She's less charming than some of the other paranormal fantasy heroines that I'm fond of, and therefore (at least to me) took longer to grow fond of. Now I absolutely love her, with all her flaws (even though I frequently want to reach into the book and slap her resoundingly). She's come a long way in six books, has the lonely half human, half-very powerful fae. She's learning, through trial and error, love and loss, and countless near death experiences, that she may not have to fight ever battle by herself. She has friends, and allies, and people who care deeply for her. In this book, she actually thinks before she acts, and willingly consults her little group of compatriots, and the book is all the greater for it.

The supporting cast are also great. Seeing the always supercilious Sir Etienne forced to humble himself  to Toby, who he clearly doesn't always like that much and becoming a more well-rounded character as a result, was good. Quentin, Toby's squire continues to be a delightful side-kick, and it's obvious that while McGuire finished off several major plot strands and a big arc with the last book, she's setting up a whole new set of them with intriguing hints about the rapidly maturing boy's absent parents. Raj, Tybalt's nephew and heir, is also central to the plot, and McGuire writes the different youths with distinctive voices and presences.

Tybalt, my absolute favourite character, really gets to shine in this book, which of course warms my heart. Having started out as almost an antagonist for Toby in the first book, Tybalt has gradually become an important friend of Toby's, always there for her when she needs him the most, yet confusing her with his cryptic remarks and sudden disappearances. A third of the love triangle of the series for a while, Tybalt was disapproving of Toby's childhood sweetheart Connor for a number of reasons, and now, having patiently waited in the wings, is ready to take centre stage. He's clearly willing to risk everything for Toby, the question is what she really wants. 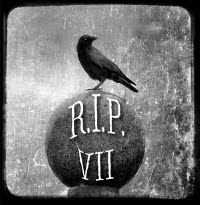 There's no question that this is my absolute favourite of the ever-improving series so far, and I'm really sorry that it'll be another year until I can read the next book. Fans of paranormal fantasy should definitely check the series out. It takes a couple of books to really hit its stride, but when it does, it grabs your attention and refuses to let go. You'll be hooked, and you won't regret it.

Being a mystery, and also a paranormal, this fits nicely into the R.I.P VII genres. This will be my first review for that challenge.
Posted by Malin at 22:45