Disclaimer! I was given an ARC of this through NetGalley in return for a fair and unbiased review. Of course, it being a Courtney Milan book, I had also already pre-ordered it, because I will buy anything she writes, even if said thing is a scientific treatise on spiders and cockroaches (the things that creep my out the most). If Ms. Milan ever reads this - please don't ever write a book like that. I will buy it, but I might not like it much.

Xingjuan "Tina" Chen is a mature student desperately struggling to make ends meet. Her goal is to become a doctor, so she'll make enough money that she and her family never need worry about paying the bills ever again. As it is, finding enough money to pay her own, and her parents' bills seems to be pretty much all Tina can think about. When she's not studying, she's working multiple jobs so she can send every spare penny home. Her father is unemployed and her mother is a cake decorator, proud every time a cake she makes turns up on "that website". She spends most of her spare time and whatever money she can find (including much of what Tina sends them) helping Chinese immigrants stay in the country and filing for citizenship. She's also a champion when it comes to emotional blackmail. Tina loves her mother dearly and admires her dedication on behalf of her community, but also feels exhausted constantly counting every penny in order to make sure her sister gets her medication and her parents' electricity isn't cut off.

So on the day when her ultra privileged classmate Blake Reynolds, trust fund billionaire and heir to Cyclone Technology (think Apple) first splashes her prized cashmere sweater with mud driving past in his sports car, and then tries to defend her in a class discussion about poverty, she pretty much loses it. She claims he wouldn't last two weeks living her life, let alone two months. Blake may not have known an hour of poverty in his life, but his cushy existence involves hard work and he feels crippled by the weight of expectation from his brilliant father. Having lived his life partly in the spotlight since he was a child, being the star of Cyclone's advertising, Blake is expected to take over the company. After his father's best friend and business partner died of a heart attack shortly before the launch of Cyclone's last big invention, his father, the legendary Adam Reynolds has just worked harder. He keeps hinting that he's ready for Blake to take over, though, and his son wouldn't dream of ever disappointing Adam. Even if it means keeping quit about the doubts and insecurities he's feeling.

So when Tina suggests trading lives, Blake is intrigued. While Tina may not think so, Blake has been admiring her from afar for a long time. He is also looking for a way to distract himself from the latest Cyclone launch and the serious conversation he's going to have to have with his father. He speaks to his financial advisors, and proposes that he and Tina actually swap places until the end of the semester. Tina will make enough money to put herself through college, and Blake will work and support her family while she works on the new Cyclone launch. Of course, to get access to the new Cyclone technology prototype, she has to sign a stack of non-disclosure agreements about as tall as herself and pretend to be Blake's girlfriend, convincing enough that Adam not hesitate to let her play with their expensive yet to be released toys.

Tina is adamant that the relationship be only pretend, and that she and Blake have no future together. Blake isn't going to push anything, allowing Tina her space, but the more time he spends with her, the more smitten he is. Yet while they're growing closer, and more attracted to each other, Blake isn't ready to share his secrets and fears with Tina either.

Anyone who has read my blog for any space of time, knows that Courtney Milan is one of my favourite authors. I consider her the best historical romance author writing at the moment and await each new release from her with bated breath. It was still a surprise when she revealed that she was taking a bit of a break from historicals to focus on contemporary romance, and New Adult at that. My experience with NA is that it tends to feature studious, often innocent and dissatisfied college women who fall for tattooed bad boys with dark pasts. There haven't really been all that many books slotted into the genre that impressed me. Of course Milan's book was one of the exceptions.

Milan's heroines are always awesome and deeply feminist role models living in a time when women had to fight to be seen or heard. Tina is a contemporary woman, but just as marginalised as many of her historical sisters in that she's an immigrant struggling to make ends meet. Seriously, Tina is dirt poor. There is a wonderful scene where Tina explains to Blake, who has a monthly allowance of 15 000 dollars just how long she can survive on a bag of rice and why it's necessary for her to do so. She can't afford to have her favourite sweater dry cleaned if her sister is to get her medication. The luxury she allows herself when she finally has Blake's income is mangoes. Nothing big, frivolous or flashy. Just fresh, ripe fruit.

Blake could have been unbearable. He's a young, charming billionaire, for God's sake. But Milan writes wonderful characters and Blake has real issues to handle, not just the fact that his father has used a public version of their relationship to advertise Cyclone since Blake was a small child. It's obvious early on that Blake has something big he's hiding from those close to him, and it's revealed every so gradually as the story progresses. I can't recall any other romances I've read where the hero deals with the same difficulties as Blake and it was an interesting take, just as I've come to expect from Ms. Milan.

In a lot of historical romances, the parents are either dead or awful. They aren't generally a feature in contemporary romances either, and if they are, the hero and heroine often have a strained relationship with them. Tina and Blake both struggle with the expectations their parents place on them, but there is never any doubt that Adam Reynolds or the Chens deeply love their children and want only good things for them. It was very refreshing to see such realistic and functional family relationships. Tina's family's good-natured teasing over Tina's obvious denials that she and Blake are a couple were great. Tina taking absolutely no crap from Adam (helped by the fact that when they meet, she's just pretending to date his son). So many good moments.

Then there is Maria, Tina's best friend, who is going to be the heroine of the next book in the Cyclone series. Maria and Tina met in college, where they were both the odd duck's out. The reasons why Maria didn't quite fit in with the rest of the girls and why she's had a lot of family drama is gradually and subtly revealed and I'm deeply impressed with the direction Milan is going. She keeps being a trail-blazer, and I was actually sorry to discover that I will have to wait until sometime late in 2015 for Maria's book, because I'm now super eager to find out more about her.

The only thing that kept this book from a full five stars is the ending, which was a bit too rushed and veered a bit too far into farcical melo-drama for me. I'm not going to deny that I laughed out loud during parts of it, but since the rest of the book was so plausibly done with such good pacing, the end just fell flat. Readers should also be aware that the book has more of a HFN (Happy for Now) ending than a HEA (Happily Ever After) and that Tina and Blake will get a second book later in the series. 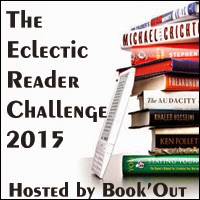