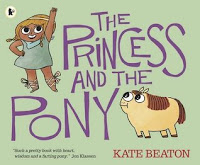 Princess Pinecone wants to be a warrior and get cool trophies or weapons, but instead she tends to get big fuzzy sweaters. For her birthday this year, what she wants the more than anything is a horse. A big, brave, strong horse. A warrior horse, fit for the warrior princess that she is. Her parents really do try, but instead, she gets a pony. A little round, yellow pony who likes to eat pretty much everything and fart a lot.

Princess Pinecone valiantly tries to train her pony and make it suitable for warfare. When the next big battle comes around, she's pretty sure they'll at least be able to make a decent effort. Pinecone and her pony wait patiently as the other warriors rage, but for quite a while they're completely unnoticed. Then everything changes and Princess Pinecone and the pony alter the course of the entire battle.

The fat little pony has been a recurring character in Kate Beaton's comics for years, showing up in both historical and more contemporary strips. I was delighted to discover that not only is the pony now co-star of its very own book, but that you can buy your very own Fat Pony Plush. It appears to be currently out of stock, but I am seriously considering buying myself one with some of the Christmas money I got.

This is a very sweet and funny children's book with Ms. Beaton's trademark illustrations in colour. It's not a very long book and probably aimed at quite young children. I can already think of several parents I want to gift this to, so they can read it to their kids. I actually think that it could have been a tiny bit longer and had a bit more substance and plot. You don't need to underestimate the patience of even a very young audience. Alas, it was not to be. I hope Ms. Beaton will instead write a whole series with the continuing adventures of Princess Pinecone and her fat little pony.

Crossposted on Cannonball Read.
Posted by Malin at 00:06