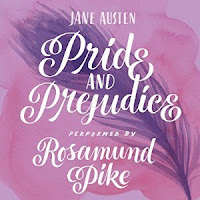 Is there anyone, from barely discovered tribes in the South American rainforests, to nomadic tribes on the Mongolian steppes, who doesn't actually know the gist of the plot of this book? Just in case there are any people who have lived in a barren cave their entire life, I will attempt to summarise it the major plot beats.

Jane and Lizzie are the two eldest, prettiest and most sensible of the five Bennett sisters. Their mother is a silly and easily upset woman who wants nothing more than to see her daughters happily married. Their father would seem to mainly want to be left alone with his books (a household full of women, I can symphatize). There's also the stuffy Mary, and the boy-crazy youngest sisters, Kitty and Lydia. A rich and handsome young gentleman, Mr Bingley, moves to the area, and Mrs. Bennett is determined that he will fall in love with one of her girls. After he meets Jane, that seems very likely to happen, but after some promising encounters, the majority of the Bennett family make a dreadful spectacle of themselves at a ball and before anyone is even cured of their hangover, Bingley's two spiteful and snobbish sisters and haughty and supercilious friend, Mr. Darcy have convinced him that he imagined Jane's affection and persuaded him to return to London. Lizzie's none too surprised as she pretty much loathed Darcy at first sight.

Meanwhile Lizzie upsets her mother by refusing the proposal of the family's distant cousin, Mr Collins, who will one day inherit their house. He marries her spinster friend Charlotte Lucas instead. After some months of getting used to her friend choosing security and a home of her own at the price of being married to someone quite ridiculous, Lizzie comes to accept her friend's choice and goes to visit her at her new home. Here she runs into Mr. Darcy again and over the course of her six week long visit, she sees him quite a few times. She likes his cousin quite a bit, but is shocked speechless when Mr. Darcy proposes marriage towards the end of her stay there. He confesses that he does so against his better judgement and that he thinks her family are beneath him, but he loves her enough to overlook their difference in station. Lizzie, having recently discovered the truth behind his spiriting away Bingley and breaking Jane's heart, as well as believing Darcy financially ruined a childhood friend, wastes no time telling the man exactly how appalled she is and tells him to stuff his proposal. He's offended, but writes her a comprehensive letter explaining his side of the story with regards to the accusations she flings at him, and once Lizzie calms down sufficiently, she starts to wonder if she's owes the man an apology.

Six months later, when travelling in Derbyshire with her aunt and uncle, Lizzie meets Mr. Darcy again, here at his magnificent estate, Pemberley. He's like a changed man, amiable, generous to a fault, complimentary and insisting he wants to introduce Lizzie and her relatives to his younger sister. Having had time to think and consider everything she learned in the letter carefully, Lizzie's heart is already more receptive towards Darcy when a terrible scandal is revealed, involving the youngest Bennett sister. Any happiness with the proper and respectable Darcy seems sure to be doomed - just as Lizzie was considering telling him her feelings had changed.

I've read Pride and Prejudice countless times, first in Norwegian, later in English. I fondly remember waiting eagerly along with my mother for every new episode of the 1995 mini series, that for a very long time type cast Colin Firth as the romantic lead in all sorts of things, as he was the perfect Mr. Darcy. When I don't have time to watch the six hour mini series, the 2005 movie version starring Kiera Knightley and Matthew McFadyen will do nicely as well. I adored the modernised YouTube version made around the book's 200th anniversary, and the spin off book resulting from it. I still return to the original every few years though and each time I rediscover little bits that I'd forgotten in Ms. Austen's brilliant romance, which as well as having several satisfying happy endings, is a very clever social satire, using the eternally unmarried parson's daughter's observations of the people around her and the situations of ladies very much in her social sphere. While Austen has written many memorable book, this was the first of hers I read and it remains my absolute favourite.

The new Audible audio version, narrated by Rosamund Pike, who played Jane in the 2005 movie version, is excellent. Ms. Pike has a lovely voice and manages to differentiate between the huge cast of characters with pretty distinctive voices for everyone, mostly to great success. It was a perfectly soothing and comforting listen in the hustle and bustle of the pre-Chistmas weeks. All the characters are so familiar to me, and having the book to listen to while running errands and trying to finish the last of the shopping made several stressful tasks go easier. If you've never allowed yourself the pleasure of reading Pride and Prejudice, you should consider the audio version for an extra treat. If you already know and love the book, get the audio, as I can't imagine a version that could be better.