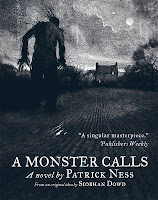 Pretty much every night, Conor wakes up screaming from the same nightmare. So when the monster shows up in his garden, just after midnight, he's not as scared as you may have thought that he'd be. After all, he deals with some pretty unpleasant things on a daily basis. The bullies who pick on him in school. The fact that he seems to be falling out with his only friend. The teachers either ignoring him or being overly understanding and solicitous. His father, who seems to have forgotten about him and his mother after he moved to America and got a new family. His strict and demanding grandmother. The worry about his mother's deteriorating health and the worry about why the treatments are taking so long to work this time. It's going to take more than some monster to scare Conor.

The monster, which seems to be a walking version of the yew tree over by the church yard, that Conor can see from his window, and which his mother always comments on when gazing at the view. The monster claims it will tell him three stories, and once it's done, it wants something Conor is not ready or willing to give. It wants the truth.

Siobhan Dowd, who came up with the initial idea for this book, died from cancer before she had a chance to tell the story she wanted. Patrick Ness took her initial idea and developed it and turned it into something new, while still honouring Ms. Dowd's memory. This is a dark book, full of sadness, rage and grief. I don't think I'm really spoiling anything for anyone when I say that you probably shouldn't expect a happy ending to this tale, where a woman is slowly wasting away despite countless medical treatments, and her only son is desperately trying to deal with it the best way he knows how.

The stories that the big tree monster tells are allegories, possibly meant to help Conor deal with his anger and grief in some way. The monster claims to have lived a long life, helping many people when they needed it the most. None of its stories turn out entirely the way Conor expects, making him more angry and frustrated, because he wants predictability and solace from his stories, not difficult life lessons.

So many others have already confessed to crying when reading this book, and I was no different. Was it a good idea to read the final quarter of this book in a coffee shop, in full view of a lot of people? Possibly not. Did I do it anyway, and ugly-cry, to the likely embarrassment of many around me? You bet I did. I've heard very many good things about the recent movie adaptation, but I suspect I'm going to wait to see it until I'm in a more stable place emotionally, or it's likely to completely destroy me all over again.

Judging a book by its cover: My edition of this book is an illustrated paperback I was given for Christmas by my husband. The cover, and all the inside illustrations are done by Jim Kay in black and white and are wonderfully atmospheric and adds a lot to the tone and feel of the book. I really like the cover and the other illustrations and don't think the book would work as well without them.

Crossposted on Cannonball Read.
Posted by Malin at 16:25