I Want My Hat Back has won award in at least three countries, including the Selezionato Mostra Internazionale d'Illustratazione per infanzia di Sarmede in 2011, E.B White Award Read Aloud Award for Picture Books in 2012, Deutscher Jugendliteraturpreis for Bilderbuch in 2013.

This is Not My Hat won the Caldecott Medal and the Canadian Booksellers Association Libris Award for Children's Picture Book in 2013, and the Premi Llibreter de narritiva for Album illustrat and the Kate Greenaway medal in 2014.

A bear is sad. His hat is missing and he wants it back. He goes and politely enquires of all the animals he meets whether they've seen his hat. They all try to help, but none of them have the answer he is looking for. A helpful deer asks him to describe the hat, and which triggers the bear's memory: He has seen his hat! You will be relieved to hear that the story ends happily, with the bear and his hat reunited.

Of all the books my husband and I read to our son, this is our favourite. While I was pregnant, I asked friends for recommendations of good children's books to get for our boy. This came warmly recommended to us by an old friend from university, who works as a librarian and has children of her own. She claimed that she would probably read  and recommend these books, even if she didn't have little girls to read them to. We have (as most parents probably do with children's books) by now lost count of the number of times we've read this book, but neither of us ever gets sick of it. I have probably written more words about this book than the entire forty pages contain. It's not a particularly complicated tale.

The whole story takes place in simple dialogue. "Have you seen my hat?" and "Thank you anyway." are the phrases most often repeated. While the bear is distressed and really wants his hat back, he's also unfailingly polite throughout. The illustrations in the book are simple and delightful, the variety of animals the bear comes across during his search (there's a frog, a snake, what we're pretty sure is an armadillo, a rabbit, a fox, a tortoise and of course the helpful deer) are not exactly your standard Northern European forest selection.

I promise I am not lying when I say that the tension builds over the course of the story, and there's a delightful twist ending that tends to make people who encounter the book for the first time laugh out loud (we have shown the book to pretty much all of our guests in the last eighteen months).

A little fish wearing a fetching blue hat zips through the water. It confesses that the hat it's wearing does, in fact, not belong to it. It stole it from a much bigger fish, who was sleeping at the time of the audacious theft. The little fish feels that the small blue hat suits it much better, as it was much to small for the big fish. Now the little fish is making his hasty escape, but is pretty confident that the big fish isn't going to wake up for a while, and when it does, it may not even notice that the hat is missing. Spoiler! The big fish does wake up, immediately notices its missing hat, and seems to have a pretty good idea who the thief is. The little fish swims to where the plants are big and tall and close together. Nobody will ever find it there. Will the little fish get away? Will the big fish catch up with him and retrieve his hat?

This is Not My Hat has a more open ending than I Want My Hat Back. In the first book in the series, there is very little doubt in the reader's mind what the fate of the hat thief is. In this book, it's more open to interpretation whether the little fish gets away or not, but the big fish DOES have its hat back in the end, and the big fish seemed none to pleased to discover it was missing in the first place. There is a very high chance of the little fish having come to an unpleasant end, just as it thought it was safe in the tall plants.

As with the first book, the fairly simple and brief story is illustrated beautifully. My favourite page is probably the one that shows the crab, who apparently promised not to say anything about having seen the little fish, clearly pointing its claw in the direction of where the little fish has swum, helping the big fish find it. Because I am a huge nerd, this page is usually accompanied by a "Curse your sudden, but inevitable betrayal." line being added to the story when I read it to our son. Gabriel likes This is Not My Hat, but he doesn't love it as much as he does I Want My Hat Back. 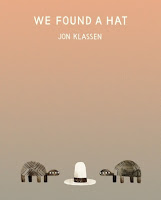 This book is actually divided into clear sections. Part one: Two tortoises, wandering in a barren landscape, find a hat. They try it on, it looks good on both of them. However, there are two of them and only one hat, so they decide that the best course of action is just leaving the hat behind. Part two: The tortoises are watching the sunset together. One of the tortoises claims to be thinking about the sunset, whilst the other claims not to be thinking about anything at all (but it's clear that the tortoise is really thinking about, and missing, the hat they found earlier). Part three: The tortoises are lying on rocks, about to go to sleep. As one of the tortoises is nearly asleep, the other is sneaking away towards the hat, until inquiring about the first tortoise's dream. When the second tortoise hears what the first tortoise is dreaming about, it lies down peacefully and goes to sleep next to its friend. It is a good dream, resolving the possible conflict about the hat entirely (but I'm not going to spoil the particulars, because that would ruin the punchline of the book).

We Found a Hat is quite a bit longer than the other two books in the trilogy. The focus here also seems to have shifted from clear hat ownership and attempted theft to aspirational hat ownership, friendship and togetherness. It's a much gentler and friendlier story, but possibly, because it lacks the edge and bite of the previous two books, it's also the book we least often seek out for reading to our son. Although, his attention span is also very short at the moment, so this book, with it's slightly longer story line and added demand on sitting still for story time may become more of a favourite as he gets a bit older.

It's probably encouraging that the trilogy ends on a lighter, sweeter and friendlier note.

For anyone with kids, my husband and I highly recommend all these three books. I have not regretted purchasing them for a second and all three books are already well loved by all the members of our little household.

Judging the books by their covers: Each of the covers gives a pretty good idea of the spare and simple, yet very engaging style in which Jon Klassen illustrates his books. The animal or animals on the cover are cute and look like creatures you'd want to read about.