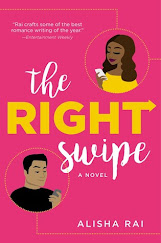 Having been burned pretty comprehensively in the past, both in her personal life and in business, Rhiannon Hunter has now worked hard to make her dating app one of the main competitors on the market. Now she'd like to buy the large, successful, but nevertheless a lot less modern company of one of her competitors, and she goes to a big tech conference with that in mind. Unbeknownst to Rhi, the owner and co-founder of this company is very eccentric and also suffers from social anxiety. So instead of appearing at the conference herself, she sends her nephew to act in her stead. Rhiannon is dismayed to discover that the handsome man is none other than the man who she shared a very steamy night with a few months ago, and who then ghosted her, never to be heard from again. To discover that he is now a spokesperson for the company she wants to acquire, and seems very close to the owner means having to spend more time with him, and Rhi is not one to forgive and forget once she's been hurt.

Samson Lima is a former football pro who made himself very unpopular with a lot of fans and supporters when he quit in the middle of a major game because his best friend was seriously injured on the field and the only way Samson could protest the owners of the team risking his friend's life by putting him back in the field was by walking out and throwing the game entirely. Samson lost his father and more recently his uncle to CTE (chronic traumatic encephalopathy). He had no intention of ghosting Rhiannon after their hook-up but was told his uncle was dying and had to rush to his bedside. Since Rhi never uses her real identity when occasionally using her dating app to meet guys, and certainly hadn't given Samson her phone number, he had absolutely no way of contacting her when it became clear that she'd blocked him in the app. Now he's trying to help his uncle's widow to drum up publicity for her flagging matchmaking company by publicly looking for love. Of course, as soon as he sees Rhi at the tech conference, the only woman he's really interested in spending more time with is her.

Rhi eventually reluctantly gives Samson a chance to apologise, and some internet research proves that he's really not lying about his uncle's recent passing. Barely healed emotional wounds from her past makes it very difficult for her to trust men, but she can't deny the attraction she still feels for the handsome, charming, athletic, and obviously caring man. When Samson, after one disastrous first date where he can't take his mind off Rhi, suggests a series of social media videos where Rhiannon, the dating expert, coaches him on modern dating, to promote both the companies they represent, he has the perfect excuse to keep spending time with Rhi and slowly convince her that she's the only woman for him.

This book has thousands of positive reviews on Goodreads, and I'd heard many good things about it on the various review sites I follow. Nevertheless, it never really connected with me emotionally, the way the best romances do. It was just ok, and now, about a month later, I'm struggling to remember plot details. I think this is a definite case of just the wrong book at the wrong time for me with this one. I've liked books by Alisha Rai before, and it's not like I have anything violently against it. I may even re-read it at some point, to see if I like it better a second time when my brain is in a more receptive place for the story it tells.

There's a lot to like here - a strong, yet slightly prickly heroine, who has worked hard and faced a lot of adversity in a male-dominated and sexist industry. There's the close friendship between Rhi and her best friend, who was able to fund her business thanks to a healthy inheritance from her husband (the BFF is the heroine of the next book in the series). Samson is a very nice beta hero, who cares deeply about his family members and getting justice for other athletes facing the same problems that eventually killed his dad and uncle. All of these things make me pretty sure that I may just not have been in the mood for this book when I read it, but it fit into several of my reading challenges, so onto the list, it went.

I may give it another chance in a year or so. Based on the sample chapter for the next book in the series, I'm very much looking forward to that one - a reclusive, plus-size ex-model and her handsome bodyguard.

Judging a book by its cover: Another contemporary cartoon cover, this one almost Pepto-Bismol pink. At least the little cartoon heads of the protagonists look pretty cute. I don't think there can be any doubt that this is a romance novel, aimed firmly at a female demographic.