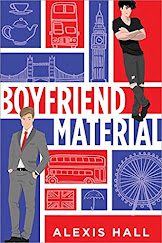 Practically perfect in every way

Luc O'Donnell is tangentially--and reluctantly--famous. His rock star parents split when he was young, and the father he's never met spent the next twenty years cruising in and out of rehab. Now that his dad's making a comeback, Luc's back in the public eye, and one compromising photo is enough to ruin everything.

To clean up his image, Luc has to find a nice, normal relationship...and Oliver Blackwood is as nice and normal as they come. He's a barrister, an ethical vegetarian, and he's never inspired a moment of scandal in his life. In other words: perfect boyfriend material. Unfortunately, apart from being gay, single, and really, really in need of a date for a big event, Luc and Oliver have nothing in common. So they strike a deal to be publicity-friendly (fake) boyfriends until the dust has settled. Then they can go their separate ways and pretend it never happened.

But the thing about fake-dating is that it can feel a lot like real-dating. And that's when you get used to someone. Start falling for them. Don't ever want to let them go.

A lot of contemporary romances are marketed as rom-coms nowadays, but very few of them actually feel as if they fit the description. Boyfriend Material, on the other hand, is frequently laugh out loud funny (and not just if you went to university with a bunch of British poshos, so parts of this feel terribly familiar) and the plot is even structured as a traditional British rom-com, complete several quirky and supportive secondary characters (one group for each protagonist, with some overlap) and a plot with big third act complications, grand gestures to win the other back and so forth.

While I have known of Alexis Hall as a writer since he briefly reviewed new to him classic romances in a very witty way over on Dear Author a long time ago now, I've only actually read one other of his books, and that was back in 2014. That was also a m/m romance, but it was, if I recall, considerably more angsty and Hall's writing skills have greatly improved since then.

The vast majority of contemporary romance that gets published is set in the US, and that's not surprising. Yet this book is very British, and as someone who lived in the UK for six years, and lived in dorms with and interacted with a lot of the same people as several supporting characters in this book, it felt refreshing and very comforting that this was set in London, and people drank cups of tea when they were upset and did other things that felt very familiar to me.

Luc and Oliver work as a couple because they are both absolutely hopeless but in very different ways. They're just sort of getting by until they meet the other, who both complicates and improves their life. I loved both of them and had absolutely no problem understanding why they each had a number of very supportive friend groups, who invested a lot in getting their fake relationship to blossom into something actually real.

If The Right Swipe felt like it just wasn't entirely for me, at least not at the time when I read it, this book, however, seemed like it was exactly what I needed and just hadn't realised until the moment when I picked it up. I stayed up way too late into the night reading this, which in itself is unusual these days, when it takes a lot more for a book to catch and hold my attention. As I have already mentioned, it made me laugh out loud several times while reading it. That's not to say that there isn't seriousness throughout, as well.

I would love to see this book turned into an actual movie. Netflix seems to be doing big business resurrecting the rom-com as a profitable genre. Get on this, will you?

Judging a book by its cover: I've seen this cover compared to the cover for my beloved Red, White and Royal Blue several places online, which I find amusing, because with the exception of both books featuring two cartoon dudes on the cover, they look very little alike. The former book is bright pink, while this book is actually red, white and blue - so perhaps that is the source of the confusion? I do like the various nods to London sights on the cover, not to mention the absolutely essential cup of tea.