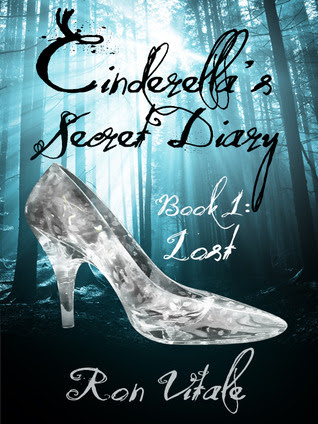 We all know the story of Cinderella, right? Stepmother, evil step-sisters, forced to work as a lowly servant, Fairy Godmother, magical shoes and dress, meets the Prince at the ball, falls in insta-love, loses shoe, Prince finds her again thanks to magical shoe only fitting her of all the girls in all the land, and then they live happily ever after. Like that...or possibly not.

What if some years into their marriage, the Prince is more interested in hunting, carousing, flirting with other ladies and sowing his wild oats? The Queen, his mother is unhappy about the lack of heirs being conceived  and while Cinderella (actually name Sophia) is a princess, she is constantly lonely and frequently reminded of her lowly background. She dreams of re-kindling that first spark of love with her husband, and also wants to go to Paris and see the world.

This book is set in the 1700s, around the time of Napoleon's rise to power. Cinderella writes almost daily in her diary, pouring out her woes and hoping that her Fairy Godmother will return and make her life a better place again. The Queen agrees to send her and her companion Clarissa to France, to see a witch who might help Cinderella conceive an heir, and they stay in a chateau outside Paris with Josephine (yup, that one, Napoleon's wife). There's a handsome young nobleman named Henri who catches both the ladies' eye, and talk of magic and witchcraft and a Silver Fox who is also King of the Faeries, and mysteries surrounding the death of Cinderella's mother.

When I read the synopsis for the book, this seemed to be right up my alley. I'm a huge fan of most things even vaguely fairy tale related, and love a good reinterpretation of fairy tales and myths. A sequel of sorts to Cinderella grounding it in actual history? Sounds cool. Unfortunately, I thought the first half of the book was a tedious drag, and the second half (once the identity of the Fairy Godmother's been revealed) was a confusing mess. I see what the author was trying to do, and I suspect he's trying to empower Cinderella to make her own choices and show how strong and independent she is. Unfortunately, I think she mostly came across as a sad-sack whiner, painfully naive and downright stupid a lot of the time. She kept refusing to heed the warnings of those around her, she made countless incredibly foolish decisions and as the whole book is written in first person diary entries from her POV, you don't really get a handle of any of the other characters in any great depth.

I thought her initial actions in France were foolish in the extreme, and while she shows some courage and bravery in choosing a harder path once she's forced to make certain choices, I still didn't like her all that much, as she kept blundering into new and dangerous situations due to her complete lack of common sense and thought to the consequences of her actions. The only reason I'm giving this two stars is because some of the ideas in this book were good, and could probably have turned out ok, I just really didn't like the execution of them much. I spent far more time being bored or frustrated when reading this book than impressed and liking it, which is a shame, because the premise was very intriguing.

Disclaimer! I was given a free copy of this book in return for reviewing it. Thanks to Ron Vitale, but based on this, I'm not sure I'll be trying any more of your books.
Posted by Malin at 18:29