This is the second book in the Inheritance trilogy, and while the book can be read independently (I read the first book, The Hundred Thousand Kingdoms nearly a year and a half before I read this one, which was fine, once I'd re-familiarised myself with the plot on Wikipedia), you'll probably get a more cohesive and generally better reading experience if you read them in sequence (without waiting 18 months between them).

In the city of Shadow, beneath the World Tree that sprang into existence ten years ago, blind Oree Shoth makes her living as an artist. She does appear to be able to see magic of all kinds, though, and her strange second sight helps her paint. Oree lives with a mysterious, taciturn stranger who she rescued from a waste bin some months back. She doesn't think he's a godling (one of the many minor gods that have started appearing in the city since the World Tree grew), because he only glows at dawn. He's clearly not all human, either, as he keeps killing himself and coming back to life.

When godlings start turning up dead, Oree and her strange house guest, along with Oree's former lover, a godling called Madden, find themselves abducted and held prisoner by a secret religious organisation. They want to keep her friends hostage, to get Oree to cooperate with them. They need her help to kill one of the major gods, the Shadow Lord himself.

This book is set ten years after the end of The Hundred Thousand Kingdoms and the major characters in that book only turn up briefly in this book, mainly as cameos. So it's absolutely possibly to read the second book without knowing what happened in the first, but I found it added another dimension to know the reasons for the major changes this fantasy world has gone through in the last decade. As in the first book, the narrative is told in first person, this time from Oree's POV. Because it's a personal narrative, it jumps a bit back and forth, as personally recounted stories often do. This, of course, enables Jemisin to put in all sorts of foreshadowing and teases for the readers. 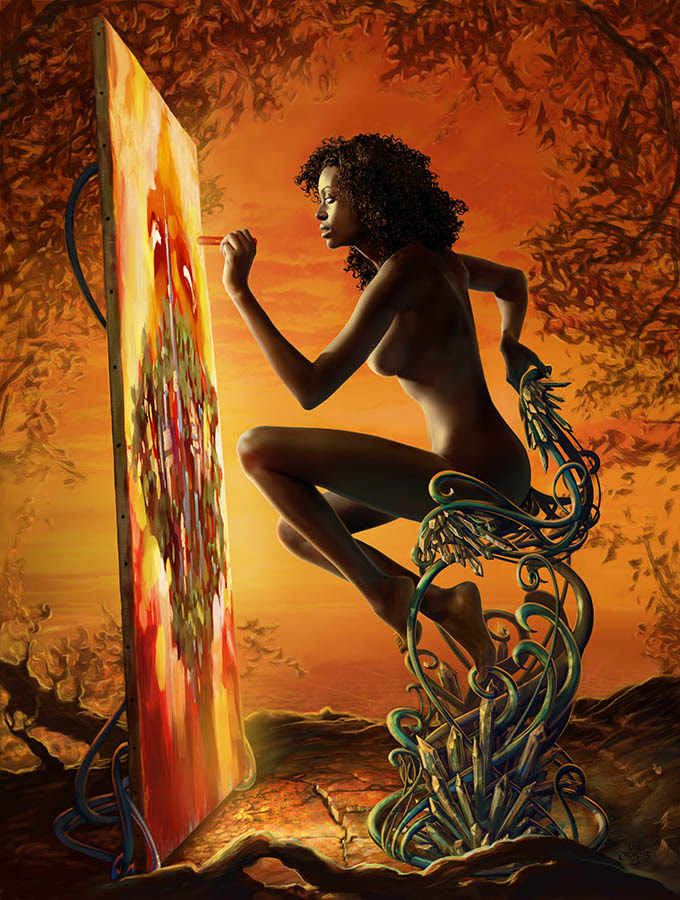 Those who have read the first book in the series, will not be that surprised at the identity of Oree's strange lodger, and I really like what Jemisin's done with this character and that she's built a fantasy universe where it's possible to explore the sorts of things she does. Jemisin is very highly acclaimed out there on the internet, and while I liked the book, I'm still waiting to be blown away by her writing, the way so many others out there seem to have been. Last year, as part of my now annual support of Worldbuilders, Patrick Rothfuss' charity fundraiser, I got the Literary Pinup Calendar, drawn by Lee Moyer. Very fittingly, September's image is of Oree. It's one of my favourite images in the calendar. I really wish I could love the book as much as I love this picture, but so far, after two books, for all that I see that her writing is great, there's just this little part of me that stays detached when I read Jemisin's books. That's not to say this isn't very good fantasy, quite unlike anything else I've found out there. Maybe the next book of hers is the one where I finally get properly hooked?
Posted by Malin at 02:37