#CBR7 Book 56: "Texts from Jane Eyre: And Other Conversations with Your Favourite Literary Characters" by Mallory Ortberg 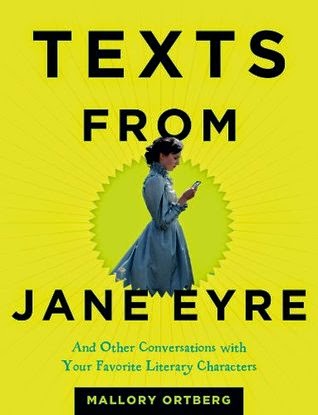 Oh people, how do I even start reviewing this book? I'm pretty sure I devoured the whole thing in less than two hours total (in between running errands, meeting up with friends, working and other stuff). I can tell you that for the bits that worked for me (about 75% of the book), I laughed so hard on occasion that my abs hurt.

I kept quouting bits out loud at my husband, demanding that he also load this onto his e-reader, so he can read the whole glorious thing. I have long been a huge fan of a lot of the things on The Toast, my favourite thing of theirs is probably "How to tell what novel you're in" feature, although there's so much that makes me laugh and/or nod my head in recognition. The single post that felt more than all the others I've ever seen on the website as if it was aimed directly at me was this, and I wasn't even vaguely surprised to see that Mallory Ortberg wrote it. Chances are, if I really laugh at something on that website, it's been written by Ms. Ortberg. Some of the text exchanges featured in this book have been posted on the website previous.

I don't know if this book would work for everyone. It probably helps if you like reading, and a bit more varied than one genre at that. Failing that, a knowledge of classical literature and the "greats" of British and American literature, as well as some historians and philosophers won't hurt. There's text conversations between Medea and Glauce, Achilles and his men, William Blake (and I assume his poor wife), characters in King Lear, Hamlet, Don Quixote, Emma, Oliver Twist, Pride and Prejudice , Moby Dick, Gone with the Wind, Little Women, the Great Gatsby, Peter Pan, Jane Eyre (obviously, what with the book being named for them) from Wordsworth, Coleridge, Plato, Lord Byron (oh God, the texts from Byron), Emily Dickinson, John Keats, as well as more recent stuff like between the characters in Sweet Valley High, the Outsiders, the Baby-Sitters Club, Atlas Shrugged, the Hunger Games and Harry Potter, to name a selection.

Each chapter is short and it's a super quick read because it's literally just text conversation. It shows such a clever insight into a number of stories, without mocking the characters or stories too much. This whole review could basically just be me quoting my favourite bits, but I really don't have space for that, so I selected one of the bits that made me laugh the most.  If you like books, and/or The Toast, you should try to get your hands on a copy of this book. You may want to borrow it from the library until it's out in paperback, as the hardback price can be too high for some.

I leave you with this exchange from Pride and Prejudice:

"And you must see to it that your sister invites Mr. Bingley, Lizzie"

"Isn't he?
he must be here
the ball is in seven days
and if he is not here then how will we convince our Mr. Darcy to attend?"

"No?
but I thought he was in London
for business
and would return in time for the ball"

"but this is terrible news"

"there is an actual war on right now
against Napoleon"

"how could this have happened??"

"he was commissioned months ago"