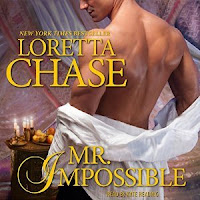 Rupert Carsington is the fourth son of the Earl of Hargate and has been sent to Egypt to get out of the way of all the calamities he's been able to get tangled in at home in England and on the continent. He finds himself locked up in a dungeon jail after seeing a bunch of soldiers beat up a beggar in the street and deciding to defend the man, beating up a horde of soldiers as a result. His bail is paid by Mrs Daphne Pembroke, a widow searching for her missing brother.

Daphne Pembroke may still be wearing widow's weeds, but she doesn't really mourn her elderly and close-minded husband. He did leave her an absolute fortune, which now allows her to pursue her passion for ancient languages, trying to decrypt the hieroglyphs. After the judgement and disapproval of her late husband, Daphne has learned to hide her intellectual pursuits. Everyone believes her brother Miles is the renowned linguist, while she's just his assistant and secretary. Now he's missing without a trace and the expensive papyrus he gave her, that she's been busy decoding, has been stolen from their house. The British consul is pretty sure Miles is just drunk in a bar somewhere, wants her to go away, and sees his chance to get rid of the troublesome Mr. Carsington at the same time.

It's clear to Rupert that Mrs. Pembroke is very clever and much more likely to keep him around if he pretends to be nothing but a dumb lug who she can order around. From her reactions to coming home to find her house burgled, and the way she speaks about languages and Egyptology, he can clearly see that she's a scholar in her own right and that the papyrus that was stolen is hers, not her brother's. He agrees with her that it's more likely that something bad has happened to Miles, and it's probably best if they find him sooner rather than later. They travel down the Nile in a river boat, trying to locate him, while sinister individuals follow them and try to do away with one or both. Travelling in close quarters also makes it clear that they have great chemistry and mutual attraction.

Mr. Impossible is the very first romance I read back in 2008, when I was re-discovering romance as a genre, having not really read any of it since I was a teenager (when I would buy it translated into Norwegian in these cheep paperbacks with lurid covers). It's still one of my favourite historicals, one of the many with a very clever heroine and the strong and handsome man who falls for her while accompanying and protecting her. Rupert, while his entire family seems to find him an impulsive idiot, is actually much smarter than he seems, he's just also very fond of brawling and drinking and tends to get himself into scrapes by hitting first and thinking later. Daphne got married when really young and spent pretty much her entire marriage being criticised and negged by her elderly husband, who was jealous that she was smarter and more adept at languages than him. Rupert and Daphne compliment each other beautifully and much of the story is a fun adventure romp, as well as a slow-burning romance. Revisiting it in audio after several years was a treat. The only thing I didn't like was the way Kate Reading voiced Rupert, but she's very good with all the various other accents.

This book is technically part of the Carsington series, but works perfectly fine as a stand-alone. It's by far my favourite of the four books, that all centre around one of the sons of the Earl of Hargate. It's a really fun book and a great romance and if I were to make a list of my all-time classics, as Mrs. Julien has done on her blog, this would absolutely have a spot on it.

Judging a book by its cover: My somewhat tattered paperback copy of this has a bright fuschia cover and a headless dude in a partially undone ruffled shirt which always made me feel as if I should cover the book up with a bag to not attract pointed looks on public transport. I'm not sure if the audio book cover is better or worse, but at least has the benefit that few people would see it on your listening device. As a lot of romance covers features naked male flesh and a lot of muscle tone, I suppose the cover designers should be applauded from showing a toned back, rather than the traditional glistening chest and six-pack abs.

Crossposted on Cannonball Read.
Posted by Malin at 01:15