#CBR9 Book 28: "Captives of the Night" by Loretta Chase 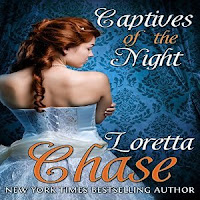 Leila Beaumont is a beautiful and very talented portrait artist, as celebrated throughout Europe as her husband, Francis, is becoming reviled. While Leila is aware of Francis adultery, his tendency to drink and take drugs to excess, she is unaware that he also ran a brothel in Paris and tended to make money through the blackmail of prominent members of society. While she hasn't allowed him in her bed for years, Leila is nonetheless grateful to Francis for rescuing her when she was orphaned in Venice ten years ago, after her traitor father ran afoul of some people he betrayed. While Francis later seduced her, he also married her and made sure she got training with the best artists, allowing her to have the career she now thrives in. Their marriage is not a peaceful one, however, which is why Leila is the prime suspect when Francis turns up dead.

Even Alexandre Delavenne, the Comte D'Esmond, initially believes that Leila murdered her husband. He first met and was enchanted with the beautiful artist in Paris, but while Francis normally cared little for all the men fawning over his wife, knowing that his constant digs at her and his own behaviour had pretty much put Leila off men entirely, he was extremely jealous about D'Esmond's attentions towards her. That this was because he himself also fancied the man, and was firmly rebuffed is not something Leila was aware of. She just knows that the very beautiful man made her uneasy in Paris and now again in London, when the world seems ready to call her a murderess. D'Esmond works for the Home Office, however, and orchestrates a beautiful show of an inquest, where there is left no doubt to anyone that Francis Beaumont died of an accidental overdose.

Once the public's mind has been set at ease about Beaumont's death, D'Esmond's superiors at the Home Office nonetheless want to figure out who actually killed him, and set D'Esmond to investigate the crime. This means he and Leila have to spend a lot of time together, reluctantly fighting their growing attraction towards one another. D'Esmond may have been working for the Home Office as an agent for the last ten years, but there are dark deeds in his past, and he realises that some of them affected Leila indirectly. Even as he wants to seduce her and win her love, he is terrified that the intelligent and dangerously perceptive woman will figure out the secrets of his past, and how he may have been the person to set her on the path to her disastrous marriage to Francis in the first place.

This book, while one of my all-time favourites, is probably not for everyone. There is too much of a mystery element to the story and the romance is probably the most angst-filled of all of Chase's books. The Comte D'Esmond is actually the villain in Chase's earlier novel, The Lion's Daughter, where as a ruthless Albanian prince, he not only tries to usurp his cousin, the Pasha, but becomes obsessed with the daughter of an English nobleman and chases her and the man she loves across Europe, intent on stealing her back. Ismal Delvina, as he was then, is stopped and nearly dies and takes up a career with the Home Office to atone for his sins, but he was not a nice individual and in his wild chase across Europe, he also stopped in Venice to demand money from Leila's father, who shortly afterwards ended up drowned in a canal. While he never saw Leila in person, he knew her father, Bridgeburton, had a child, and commanded his henchmen to drug her while they were doing business. Leila woke up groggy and disorientated in the carriage of Francis Beaumont, who claimed he had rescued her from burglars, breaking the news of her father's death to her.

While Leila is completely unaware of this, once it's revealed to Ismal/D'Esmond that she is Bridgeburton's daughter, he is painfully conscious of the fact that his former actions led to her being in the clutches of Francis Beaumont, an innocent and sheltered girl, who was easily seduced by him and later shackled in marriage to him for the next decade. For all that she's not had a great marriage and is aware of many of her husband's flaws, Leila refuses to see herself as a victim and is grateful to her husband for making her the artist she now is. It takes her a long time to realise just how insidious and toxic his influence over her has been, and how many insecurities and hang-ups she harbours, all placed there carefully by her husband, to ensure that while she may not be allowing him into her bed, she certainly wasn't going to sleep with and experience pleasure with anyone else either. Leila is so strong and smart, yet so wounded and vulnerable and the process she has to go through in this book is rather painful to read about in parts.

Ismal/D'Esmond has long since gotten over the woman he chased across Europe, who has been happily married for the last decade. Leila is probably the first woman to fascinate him as much, yet he is painfully aware at all times that the secrets he harbours will hurt her when they come to light. That she is frighteningly perceptive and sees things in him that others don't appear to doesn't help. He is in love with her long before he's able to finally break through the layers of conditioning that make her think sex is something rather repellent and allowed access into her bed. He knows that when she finds out the truth (and he has no illusions that she won't eventually figure things out), she will be deeply hurt and possibly ask him to leave her forever.

Seriously, this is a really angsty book with very complex and wounded people. Once Ismal/D'Esmond finally manages to seduce Leila, we're about 70% into the book (although they seem to make up for lost time once they get started), so for much of the book there is just a fairly complicated and somewhat tiresome murder investigation (even the protagonists admit that this mystery is tedious), with the couple learing more about one another as they question and investigate others. Francis Beaumont is an absolutely odious individual, so there are MANY people with a will and motive to murder him. He was a master manipulator, and it takes Leila a long time to realise and deal with the ways he messed her up.

Anyone looking for a light-hearted and amusing romp, would be much better off checking out Mr. Impossible or The Last Hellion, or reading something in Tessa Dare's Spindle Cove or Castles Ever After series. This is not an easy or comfortable book, but the romance feels so much more earned at the end because of it. It should also be pointed out, for those readers who are sick of "pregnancy epilogues" - Leila is barren and can't have children, and there is a frank and very touching discussion about adoption in the later half of the book.

A final note - I listened to this in audio book this time around, and as with the other Loretta Chase historicals, it's narrated by the excellent Kate Reading. She is especially good at accents and the way she changes the voice and accent of D'Esmond/Ismal once he reveals his background and true identity to Leila is really well done.

Judging a book by its cover: My paperback cover of this has a blond dude with stubble looking out from behind a curtain. I refuse to believe it's supposed to be Ismal/D'Esmond, but refuse to acknowledge this, as he's described several times in the book as the most beautiful man anyone has ever seen, and the slightly scruffy surfer dude on the cover clearly doesn't fit that. The audio book cover is this underwear-clad red-head, where I always get more distracted by the beautiful blue brocade wallpaper than the woman. Not sure if that was entirely the effect the cover designers were looking for.

Crossposted by Cannonball Read.
Posted by Malin at 14:50