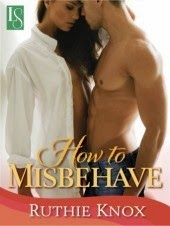 Having really enjoyed Along Came Trouble, I wanted to check out more of Ruthie Knox' Camelot series, and as they are extremely reasonably priced, I went out and bought the entire thing. This novella is a sort of prequel, showing how Amber, Caleb (the hero in Along Came Trouble)'s older sister met her husband Tony.

Amber Clark is your quintessential good girl, working as a program director at the Camelot Community Centre, spending quiet nights in the apartment in the complex her parents' manage. She never steps a foot out of line, but that doesn't mean she doesn't have fantasies. Quite a few of them involve the handsome building foreman who's been doing work around the Community Centre. When there's a tornado warning, Amber is forced to take shelter down in the basement with the hunky contractor, discovering that his name is Tony Mazzara, who's absolutely noticed Amber noticing him, so to speak.

Stuck in the dark basement with him for hours, Amber discover that Tony is terrified of the dark and they talk about everything under the sun to distract him from his panic. The unusual situation in the dark allows Amber to let go of some of her inhibitions and she's able to tease and flirt with Tony in a different way than she's managed with guys in the past. By the time the literal hurricane is over, the tension between Amber and Tony has reached quite a stormy pitch of its own. Is Amber as ready to flirt with Tony back in the light of day?

This constitutes a teeny tiny spoiler for Along Came Trouble, where Amber and Tony have three kids and a puppy, and have been married for the best end of a decade. So it wasn't exactly a surprise (like it ever is in a romance) that they find a way to relate to each other even when they're out of the storm shelter basement.

Even though this is a fairly short novella, Amber and Tony are nicely developed as characters, not just cardboard cutouts who meet and decide to have sex. They both have baggage in their back story which could create problems in a relationship, but because they're forced to spend hours talking on their first "date" together, they're able to get past a lot of awkwardness and move towards a more open and honest relationship later in the story. This was a nice little addition, showing me more of the Clark family dynamics and I be moving on to little sister Katie's story next.

Crossposted on Cannonball Read.
Posted by Malin at 23:35