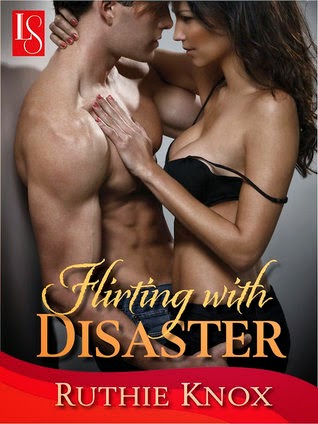 Katie Clark went with her boyfriend when he wanted to move to Alaska and worked to save up for her own college education while putting him through college. Knowing that her family weren't huge fans, she didn't tell them that she actually got married while they were there. By the time it was Katie's turn to go to college, it was too late. Her husband had emptied their joint savings account, leaving her a note saying he was off to find himself, hiking in Nepal. Katie slunk back home to Camelot, refusing to tell anyone in her family what really happened. Her brother Caleb let her move in with him and gave her a job as office manager in his new security firm, hoping to help her back on her feet.

Now newly divorced, Katie has finally come clean to her family and is determined to put her painful past behind her. She wants to reinvent herself as a confident, sophisticated woman and a full agent in her brother's security firm. She's convinced him to give her a chance to prove herself, trying to figure out who is stalking and threatening a famous singer-songwriter. As there was plenty of sparks the first time Katie met their new client, she's hoping that maybe she can blow off some steam while forgetting her weasel of an ex-husband once and for all. As long as her partner on the assignment, the silent, brooding and constantly disapproving Sean Owens, doesn't sabotage everything for her.

Sean Owens isn't entirely sure that Katie even remembers him from high school, when he was the geeky kid sitting behind her in math class, while she was off with the cool kids. Suffering from a crippling stuttering problem, Sean has mostly managed to control it, except for when he's in the presence of or thinking of Katie. Then he stutters so badly he can't even pronounce her name. Actually the part-owner of a successful internet security company in California, Sean only returned to Camelot to bury his mother and pack up her house and put it on the market, but when he met Caleb Clark in a bar and was offered a job in his security firm, he found that he liked the idea of a new challenge. He hadn't envisioned having to work so close to Katie every day, and when he's sent off on an assignment with her, it's clear he won't be able to give her the silent treatment for much longer. One thing is clear, he's not about to stand around and watch the woman he's had a crush on for over a decade, throw herself at the rock star they're hired to protect.

Unlike with the previous stories in this series, Flirting with Disaster has a mystery subplot, as Sean and Katie try to figure out who has been sending threatening messages to Judah Pratt, the aging music star they're sent to help. Their job is made more difficult by the fact that Judah is clearly hiding a whole host of secrets and seems very reluctant to be entirely forthcoming, even though his life might be in real danger. To readers who may be worried about a love triangle - he doesn't really present much of a threat to Sean, more of a motivating factor for the man to finally reveal his true feelings for Katie.

While the other Clark siblings, Amber and Caleb, seem to have fallen very quickly for their partners (although we only really see the beginnings of Amber's relationship), Katie and Sean have actually known each other since high school, although they've spent most of their lives since then apart. By the time this book starts, Sean has been back in Camelot for a few months already, though, working with Caleb and trying his damndest to never have to engage Katie in direct conversation - to the point where Katie is convinced he pretty much hates her. Instead, the opposite is true. Having had a crush on her in high school, Sean was not exactly thrilled to discover that his feelings returned with a vengeance upon his return to Camelot.

As soon as Sean and Katie are actually forced to spend time together for more than brief moments, Katie realises that she's seriously misjudged her new working partner. This is nice, as it avoids a load of complications and unnecessary drama. The possible complicating factor of Judah is also very quickly dealt with - he's not a rival of any sort to Sean and in fact becomes an important friend and support for Katie.

Having made a number of poor decisions in her personal life, allowing herself to be used by her ex-husband until she was left stranded in Alaska without barely a penny to her name, despite the years she put in supporting him. She's always given everything of herself to help others, but is coming to realise that a person can be too giving and helpful and that it shouldn't come at the expense at your own health and happiness. She's so eager to reinvent herself and prove her worth to her brother and family. As the story progresses, she comes to accept that a lot of the qualities she thought were pure weaknesses and that she needed to change, can in fact be assets and that the image she had of what she needed to become might not be what will actually bring her happiness. She may not have what it takes to be a good security agent, but she has excellent interpersonal skills and a real gift for getting people to open up to her.

Sean is a really great hero. Self-conscious and awkward around Katie because of his stutter, he is also a very successful businessman who along with his best friend turned their teenage hacking hobby into a lucrative internet security business. Unfortunately, coinciding with his mother's death, the company is facing challenges and he's feeling the pressure to come up with something new and innovative to put his company back in the forefront, ahead of their competitors. He's worked hard to overcome his confidence problems and speech impediment. When he finally cracks and has no choice but to talk to Katie, he's surprised to discover that she seems completely unfazed by his stutter and once he starts relaxing around her, his stutter becomes much less of a problem, as well.

Once again, this book felt realistic and the characters were nice people to hang out with on the page. While it turns out Sean is really wealthy, this wasn't a "billionare and the secretary" type of story. Both Katie and Sean have a number of personal challenges that they need to work through in order to get their relationship to function properly, no matter how scorching their chemistry is when they finally let go and jump each other. The slow build of their relationship, coupled with the satisfying solution to the mystery of who is stalking and threatening Judah made this another fun and quick read. Based on the books I've now read by her, Knox is about one book away from becoming an auto-buy author for me.

Crossposted on Cannonball Read.
Posted by Malin at 00:31