#CBR7 Book 109: "Bonk: The Curious Coupling of Science and Sex" by Mary Roach 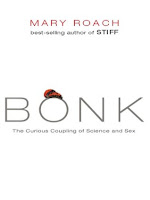 I don't read a whole lot of non-fiction. What little I do read is usually in the celebrity biography genre. But for my Eclectic Reader Challenge, I needed to read something qualifying as Micro history. I didn't even know what that was, but the internet was very helpful in clearing up my confusion. Goodreads even has a lot of useful suggestions of what I could read. As Bonk had a fairly high average rating, and was very highly rated by several of my like-minded book friends, not to mention that I was curious about the subject matter was handled.

I really wasn't sure what to expect, as I mentioned, this is pretty much my first foray into micro history, but Ms. Roach is a very entertaining writer and covers the topic from a number of angles. She writes about famous researchers like Kinsey, Masters and Johnson who worked diligently during the 20th Century, but also goes back earlier, looking at the way sex was viewed historically and how the research of it developed. She's clearly travelled all over the world for her answers, interviewing pig farmers in Denmark, doctors in Asia and on occasion, she even volunteers herself (and on one occasion) as a research subject.

Some chapters were absolutely more fascinating than others. I must also confess that my reading of this book was interrupted by the release of Carry On, and having to read the last third of this book with one heck of a book hangover after a book about gay wizards probably meant that I was no longer really in the right frame of mind for scientific facts about sex and sexual research, no matter how entertainingly it was written. I may try to re-read the book at a later date, when I can give my full attention to it.

Crossposted on Cannonball Read.
Posted by Malin at 21:41