In the middle of May this year, I discovered the 2013 Book Bingo Challenge hosted by Anne and Kristilyn over on Reading in Winter.

As with many of the challenges I've taken part in this year, it was thanks to Jen K, who takes part in so many different challenges, I'm amazed she can keep track of them all.

The goals these ladies set for themselves are goals I set for myself as well (although I would never have done as much re-reading this year if it weren't for this challenge).


There was also a "free square" in the middle of the board, but the intention here was that you could only cross it off by reading a book or genre suggested by another participant of the challenge (hi Jen!)

I completed the challenge on the 29th of December. It was generally a lot of fun, even though it made me do a lot more re-reading than I was initially planning on. 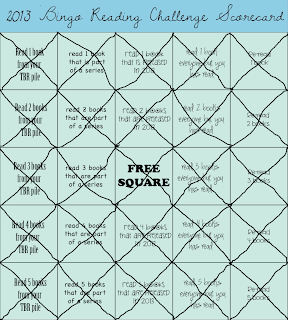 All these squares are legitimately crossed off: